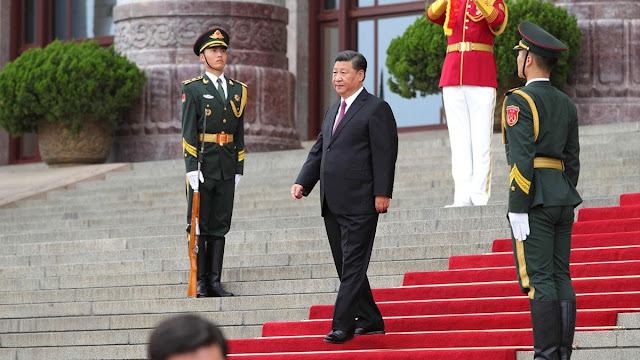 UMMATIMES - "The Chinese people are not only good at destroying the old world, they have also created a new world. Only socialism can save China," Xi said.
In his hour-long speech at Tiananmen Square, Xi pledged to build up China's military, commit to Taiwan's reunification, and ensure social stability in Hong Kong. Xi said that the Chinese people will never allow foreign powers to bully, oppress or subdue them.
"Anyone who dares to try to do that will have his head banged against the Great Wall by more than 1.4 billion Chinese people," Xi said.
Xi's assertive remarks garnered applause from the 70,000 invited guests who gathered in the large square in downtown Beijing. The phrase became the top trending topic on Weibo.
A professor of public management at Beijing Normal University, Tang Renwu, said the tough talk was in response to US and Western efforts to contain and pressure China. "Xi's stronger-than-usual response will lead to more patriotic and nationalistic sentiment among the Chinese people," Tang said.
The popularity of Xi and his party has only increased as China has been able to quickly emerge from the Covid-19 outbreak and take a more assertive stance on the global stage. But Beijing faces external criticism for its crackdown on Hong Kong and its treatment of ethnic minorities in Xinjiang. A survey of 17 developed countries released by the Pew Research Center on Wednesday (30/6) showed that, the view of China remains broadly negative and confidence in Xi is near historical lows.
Celebrations of the Chinese Communist Party's birthday on Thursday kicked off with fighter jets and helicopter flights. The 3,000-member choir sang seven socialist songs during the event.