Cambodian authorities, who confiscated a lion from its Chinese owner, last weekend returned the lion to its owner. The lion was returned to its owner who lives in Cambodia, after the intervention of Prime Minister Hun Sen. 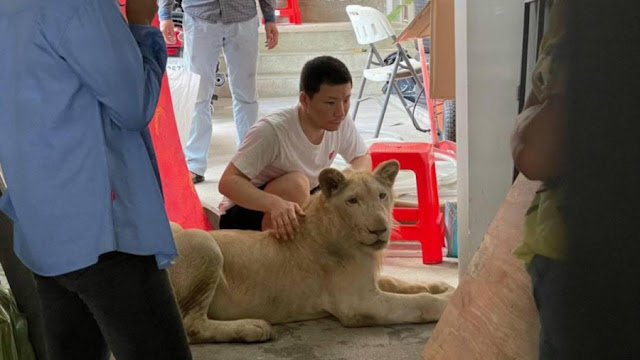 UMMATIMES - Earlier on June 27, 2021, police and officers from wildlife protection in Cambodia made a seizure of a lion, which was kept as a pet. This action was taken after circulating on social media
TikTok lions are kept as pets like dogs, by Chinese citizens living in Cambodia.
The identity of the lion's owner has only been published under his surname, Guo. He denies accusations of mistreating the wildlife.
In a Facebook post on Sunday, July 5, 2021, Prime Minister Hun Sen ordered the 18-month-old male lion to be returned to its owner on condition that the owner provide a proper enclosure.
Authorities have said keeping lions as pets is illegal. However, Hun Sen said this was a different case. Because the owner of the lion has kept the beast since he was a baby and has treated him like a family member.
“At first I was sad, but now I am happy and touched,” said Guo.
The NGO Wildlife Alliance, which is helping with the lion's seizure effort, as of Monday, July 5, 2021, has yet to comment on the decision to return the lion to its owner.
The British Ambassador to Cambodia, Tina Redshaw, expressed her disapproval of the decision to return the lion to its owner. Because it is tantamount to undermining laws that prevent the illegal possession or trade of wildlife.