President Vladimir Putin inspected a prototype of the new Sukhoi fifth-generation fighter on Tuesday that Russia unveiled at the MAKS 2021 air show with the aim of exporting the market. 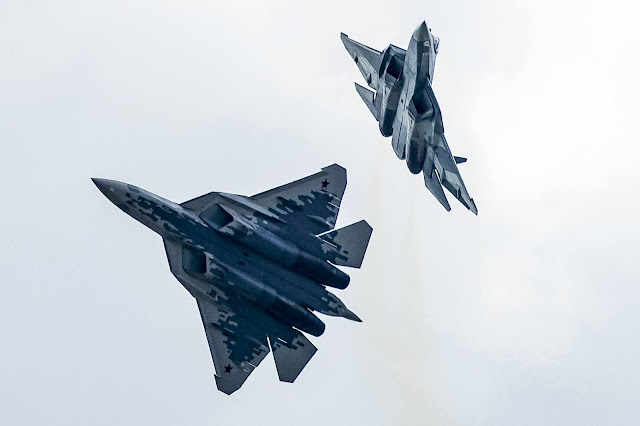 UMMATIMES - The fighter, dubbed the "Checkmate" (Checkmate) project, will likely be touted as a rival to the US F-35 stealth fighter, said Oleg Panteleyev, head of analysis agency Aviaport.
The fighter is expected to be airborne in 2023 with the first batch to be produced in 2026, said Yury Slyusar, head of the United Aircraft Corporation.
Russia plans to produce 300 aircraft over 15 years after serial production begins, he said.
"300 aircraft are in the business plan. We hope it will be completed in the next 15 years," Slyusar said, adding that the plan rested on market analysis, TASS reported.
Rostec, Russia's state defense and aerospace conglomerate, said the plane was difficult to detect and would have low operating costs.
The head of Rostec, Sergei Chemezov, said the fighter would be sold for $25 million to $30 million, the RIA news agency reported. Russia expects requests from countries in the Middle East, the Asia Pacific region and Latin America, he said.
"Our goal is to keep the cost per flight hour as low as possible, so that it is economical not only to buy but also to operate it," said Slyusar.
Russia has been successful in producing prototypes of the new weapon system in recent years, but sometimes struggles to move to serial production.
Under Putin, Russia has invested heavily in military aircraft and new weaponry, both for its own armed forces and also to increase export revenue from arms sales. Many of its new weapons are still based on Soviet-era technology from the Cold War.
Russia already has fourth-generation fighter jets, the heavy Sukhoi Su-27, and the light Mikoyan MiG-29. Russia has one heavyweight fifth-generation fighter jet, the Su-57, but none on par with the lighter class, Panteleyev said.
"Lightweight fighter jets are more in demand in the world than heavyweights – they are cheaper and better suited for states that don't have large territories," he said.
In 2011, Russia used
the MAKS air show to unveil the Sukhoi Su-57 stealth fighter.
United Aircraft, which is part of Rostec, owns the Sukhoi aircraft manufacturer dating back to the Soviet era.
Sukhoi's new single-engine fighter jet can carry up to five air-to-air missiles of various ranges, according to Rostec.
"The new light jet aircraft can carry up to five air-to-air missiles of various ranges in its top version," the Rostec presentation said.
This machine is capable of carrying the entire spectrum of fifth-generation missiles and bombs. During the presentation, the aircraft was accompanied by mock missiles RVV-MD, RVV-SD and H-59MK.
The new Sukhoi fifth-generation fighter can operate in a networked combat system and act as part of a group of manned and unmanned aircraft, Checkmate chief designer Mikhail Strelets told TASS.