Indonesia and Russia are known to have close relations since the reign of President Soekarno. One of the symbols of the closeness of the two countries is the establishment of the Blue Mosque in the city of Saint Petersburg. 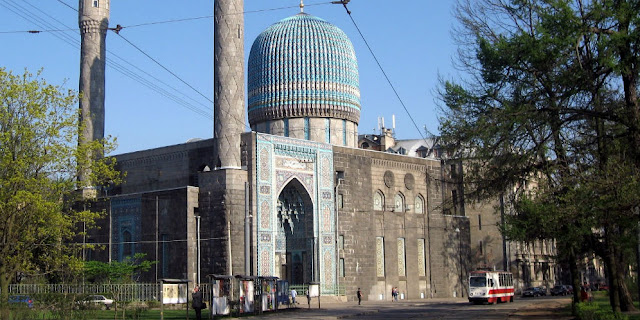 UMMATIMES - Bung Karno's arrival to the Soviet Union in 1956 to fulfill the invitation of the Chairman of the Council of Ministers Nikita Khrushche was the background for the renovation of one of the largest mosques in Europe.
The story begins when Bung Karno was exploring the Neva river in Leningrad City (the name of the city of Saint Petersburg at that time). Bung Karno's attention was focused on two towers with blue domes and a crescent moon symbol. He was surprised because the building is physically a mosque but functioned as a warehouse that was not maintained.
Bung Karno then went to Moscow and met with Khrushchev. Bung Karno told the Soviet leader that he was not happy when he saw the mosque being neglected. Finally, the first Indonesian president asked the Soviet government to hand the mosque back to the Muslims there.
"Soekarno asked for this mosque to be returned according to its function. Ten days after President Soekarno's visit, this building has returned to being a mosque," said Mufti of the Blue Mosque, Ravil Pancheev, quoted from RBTH, Friday, July 9, 2021.
This story was also obtained by the Indonesian Ambassador to Russia Mohamad Wahid Supriyadi when he visited St. Petersburg 20 February last year. Pancheev even showed him some pictures when President Soekarno visited the city and met several Muslim figures at the Blue Mosque.
Now the Blue Mosque has returned to function as a place for Muslims to worship. Based on historical reports, this mosque was originally built in 1910 by Muslim workers who came from southern Soviet regions such as Dagestan, Kazakhstan, Tajikistan, and Turkmenistan.
This mosque is the work of architect Nikolay Vasilyev. He combines eastern ornaments and turquoise blue mosaics on domes, gates, minarets, and imam's mihrab so that it is known as the Blue Mosque. The mosque has a 39-meter-high blue dome and 49-meter-high twin minarets.