Sydney Prepares To Extend Lockdown As Other Cities Open

Sydney Prepares To Extend Lockdown As Other Cities Open

The Covid-19 lockdown in Australia's largest city, Sydney, is set to be extended as new cases remain high despite a month under strict stay-at-home orders. Meanwhile Victoria and South Australia eased restrictions from Wednesday (28/7). 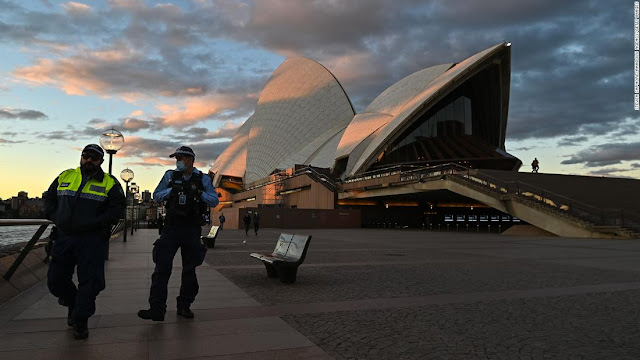 UMMATIMES - Sydney is battling to contain the worst outbreak this year of an increase in infections, which was triggered by the highly contagious Delta strain of the virus. Officials asked residents to stay at home except for urgent reasons. The regional quarantine that has been in place for weeks will end in three days.
Australian media said authorities would announce a four-week extension on Wednesday after strict restrictions failed to bring down cases. New South Wales, whose capital is Sydney, on Tuesday (27/7) reported 172 new cases, its biggest daily increase since March 2020.
The office of the head of government of New South Wales did not immediately respond to a request for comment. Of particular concern is the increasing number of positive people with the Delta variant moving in the community. If that figure returns to near zero, the strict restrictions will not continue, authorities said.
About one person in three new cases detected over the past few days was hanging around the community when the person was infected. As Sydney braced for tighter restrictions through most of August, the states of Victoria and South Australia emerged from quarantine restrictions on Wednesday after tackling the virus outbreak.
Australia has kept the Covid-19 rate relatively low, with more than 33,200 cases and 920 deaths since the pandemic began. However, the fast-moving Delta variant and low vaccination coverage have frustrated residents.
Many Sydney businesses have been forced to close, with the quarantine expected to have a major impact on Australia's A$2 trillion economy. Treasury Secretary Simon Birmingham said the federal government could provide more support to entrepreneurs depending on decisions made by New South Wales authorities.
"(The prime minister) will speak more today," Birmingham told the Australian Broadcasting Corp. Wednesday (28/7).