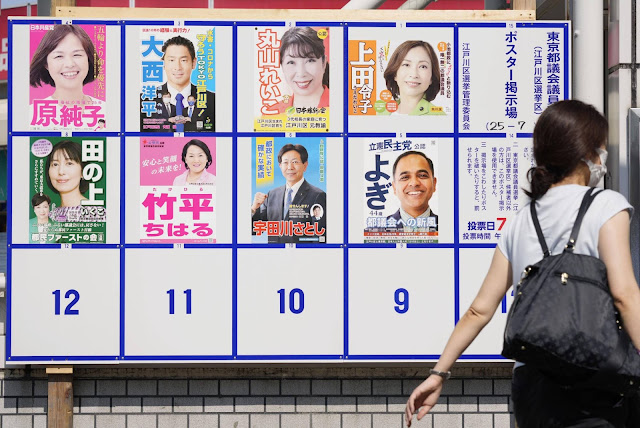 UMMATIMES - The survey results show that the Liberal Democrat Party (LDP) is likely to win this regional election. The LDP is the party that brought Yoshihide Suga to the Prime Minister's seat.
The Tokyo regional elections, which are held in the midst of the coronavirus pandemic, will not have a significant impact on the holding of the Tokyo Olympics. But this election is important because it will guide the lower house elections, which will be held in October 2021.
Analysts say the Tokyo regional elections could help provide support for Suga for the next term. Suga's term as party chairman ends in September and the LDP chairman is almost certain to become Prime Minister of Japan, where the party holds a majority.
"I am voting for a candidate who is not from the LDP Party because I am against hosting the Olympics even though it is too late to change," said a 60-year-old Tokyo resident who asked not to be identified.
Tokyo regional elections close at 8 p.m. A survey conducted by the Yomiuri Shimbun newspaper showed 23 percent of respondents said they would vote for the candidate from the LDP, 17 percent of respondents would vote for the Main Tokyo Citizens Party and 8 percent for the candidate from the Japanese Communist Party.
The Main Tokyo Citizens Party wants the Olympics to be held without spectators. Meanwhile, the Japanese Communist Party wants the world games to be cancelled. Prime Minister Suga previously said his side still wanted to hold the Tokyo Olympics, but that he would not hesitate to ban local spectators from attending if necessary.