The most popular news on world channels all day yesterday started with Malaysians waving the white flag during the lockdown. Flags are flown when people ask for help. 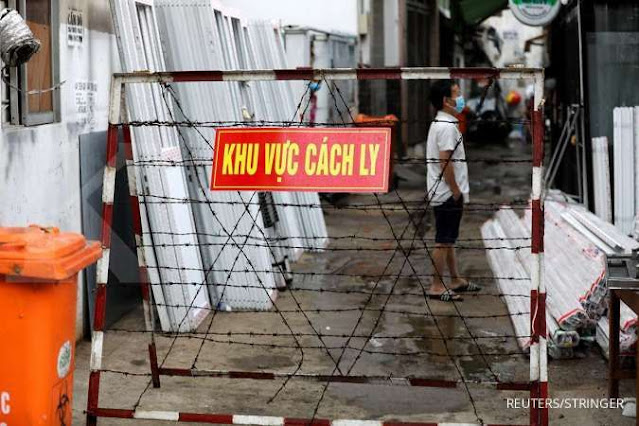 UMMATIMES - Other news is that panic buying has occurred in the Vietnamese capital due to the lockdown issue. Thailand's third most popular news item refuses to give mRNA vaccines to medical staff due to concerns that Sinovac's vaccine is in doubt. Here's more:

1. Malaysians raise the white flag asking for help during lockdown

This week the white flag has been circulating on Malaysian internet networks as the government implements a nationwide lockdown to control the spike in the country's worst Covid-19 outbreak.
In Petaling Jaya, on the banks of the Way river, the bamboo gate of the brick house is affixed with a white flag with long poles.
Jambu Nathan Kanagasabai, a 64-year-old man, put up the white flag on the morning of July 1 after seeing a post by a local retail chain offering food parcels to those in desperate need of help.
Not long after, passersby took note of his plea and alerted the local village committee.
"The chairman of the committee offered my father cash, but he only needed food because he was reluctant (embarrassed)," said Jambu Nathan's daughter, Vani, quoted by Channel News Asia, July 7, 2021.
The campaign, which was launched on social media recently, says people should send a "white flag" to show that they need help, especially in terms of need due to the country's total lockdown, according to Free Malaysia Today.
"Raise the white flag if you need help, no need to beg or feel ashamed. Don't take any action that can harm yourself and your loved ones," reads the appeal circulating on Malaysian social media.

Vietnam's capital, Ho Chi Minh, is facing panic buying as news circulates that a lockdown will be implemented. In various supermarkets, shoppers have run out of basic necessities to survive during the lockdown. According to supermarket guards, panic buying has occurred since last Tuesday.
"They bought everything and now I can't buy any ingredients for my son, not even eggs," said one Vietnamese, Huong, quoted by Channel News Asia, Wednesday, July 7, 2021.
Similar actions occurred not only in supermarkets, but also in traditional markets and wet markets. As a result, as per this report, both types of markets have been closed, which makes it difficult for residents who have not made any purchases.
"Many food shelves are empty and I'm really worried about the next situation," said another Vietnamese named Truong Thi Ngoc.
So far, the Vietnamese government has not even stated that there will be a lockdown. Even so, there has been speculation among residents that a lockdown will be carried out to suppress the spread of the increasingly virulent COVID-19 virus.
Vietnam, as per this report, has recorded 22,341 cases and 97 deaths from COVID-19. Initially, Vietnam was considered successful in controlling the COVID-19 pandemic with its strict social restriction policy. Throughout January to March, the number of cases per day has never touched the hundreds.

A leaked Thai health ministry document has prompted calls for medical staff who have been inoculated with the Covid-19 vaccine to be given booster doses of the mRNA vaccine, after the ministry said such a move could undermine public confidence in Sinovac Biotech's vaccine.
The internal memo containing various opinions was reported by local media and widely shared on social media, reported by Reuters, 7 July 2021. The memo was confirmed by Thailand's Minister of Health Anutin Charnvirakul as the original memo.
The memo contains comments from an unnamed official recommending authorities not to give Pfizer-BioNTech vaccine injections to frontline healthcare workers, as such a move would admit that the Sinovac vaccine was ineffective.
Thailand has given Sinovac vaccine, a vaccine made from a domesticated coronavirus, to most health workers and field studies show two doses are 95% effective in reducing mortality and severe symptoms. Studies show that it is 71% to 91% effective in stopping infection with the Alpha variant, Reuters reports.
Sinovac in China did not immediately respond to a request for comment on the efficacy of its vaccine.