Turkey has continued to tackle the remaining 14 forest fires since Wednesday, while at least 70 fires have been brought under control. 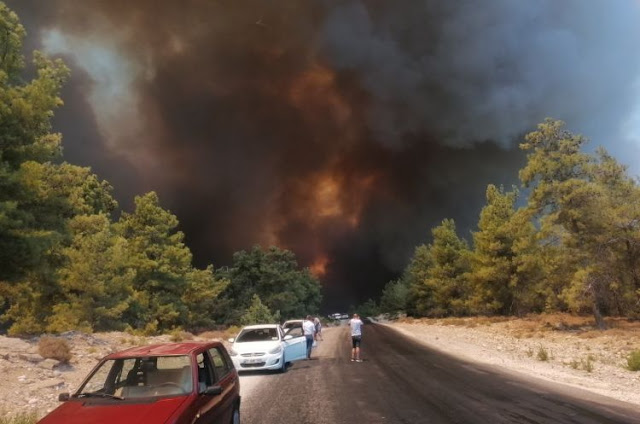 UMMATIMES - Speaking to reporters in Istanbul, the country's president Recep Tayyip Erdogan on Friday said a total of 45 helicopters were deployed in the fight against the remaining forest fires.
"As of today, the number of aircraft has grown to five to six aircraft from Russia and Ukraine," he said, adding that Azerbaijan also sent seaplanes to Turkey.
"Efforts to fight forest fires are carried out at 1,140 points," Erdogan said, adding that unmanned aerial vehicles (UAVs) were continuously monitoring the situation in the region.
President Erdogan also noted that Agriculture and Forestry Minister Bekir Pakdemirli, Foreign Minister Mevlut Cavusoglu, Interior Minister Suleyman Soylu, and Environment and Urbanization Minister Murat Kurum are currently in the region and are following the situation closely.
Erdoan pledged aid to the victims of the forest fires, including those whose homes were burned and their livestock killed. The president also said that investigations into the causes of the fires in various parts of the country were "continuing intensively."
Forest fires have erupted over the past few days in Turkey's southern provinces of Antalya, Mersin, Osmaniye, Adana and Kahramanmaras. The red rooster also appears in the forests of the provinces of Mugla, Kirikkale and Kayseri.