UK to Open Doors to EU and US Travelers

UK to Open Doors to EU and US Travelers

British Prime Minister Boris Johnson is expected to approve the reopening of the UK's doors to double-vaccinated travelers from the European Union and the United States on Wednesday (28/7). 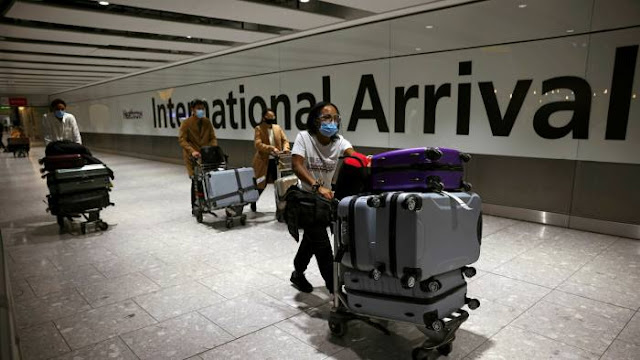 UMMATIMES - According to a Financial Times report, British government ministers are pushing the prime minister to act. The decision comes with conditions deemed safe to start accepting foreign tourists back without needing quarantine if they have received two doses of the vaccine. Citing a Whitehall official, the measure could take effect from next week.
The news comes after Britain's Heathrow Airport asked the government on Monday to open the country to vaccinated visitors from the European Union and the US starting later this month. The move will help promote travel recovery.
Heathrow Chief Executive John Holland-Kaye said Britain could exclude fully vaccinated US citizens from quarantine in the coming days. He wants more countries added to Britain's green list for low-risk travel.
Airlines UK, the industry body representing British Airways, Virgin Atlantic, easyJet and others, warned more aviation jobs would leave if the government didn't make changes to its next travel review expected later this week.
Heathrow before the pandemic was the busiest airport in Europe. Holland-Kaye said UK travel restrictions were pressing down on trade volume and tourist demand, pushing cumulative pandemic losses to $4 billion.
Passenger levels at Heathrow are about 20-25 percent of pre-pandemic levels. Meanwhile, according to Holland-Kaye, European airports have returned to around 50 percent.
"Without passenger planes going to global markets like the US, UK exports don't come out of that country, and the UK will be left behind and that will cost jobs unless we open it up," Holland-Kaye said.