US Secretary of Defense Visits Singapore to Discuss Regional Cooperation

US Secretary of Defense Visits Singapore to Discuss Regional Cooperation

US Secretary of Defense Lloyd J. Austin III visited Singapore for an introductory visit and strengthening relations amid the warming of China's maneuvers in the South China Sea. 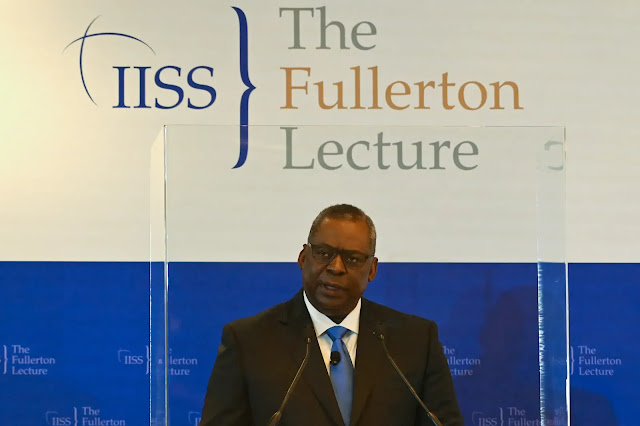 UMMATIMES - In a republican Ministry of Defense (MINDEF) statement, Singapore's Defense Minister Ng Eng Hen and Minister Austin reaffirmed the excellent and longstanding bilateral defense relationship between Singapore and the US.
"Both parties expressed satisfaction that military cooperation continues to be strong despite the Covid-19 pandemic," explained MINDEF on Tuesday (27/7).
Ng and Austin also exchanged views on geopolitical developments and regional security issues, and agreed on the importance of continued US engagement in the region. In a joint statement issued after the meeting, the two acknowledged bilateral defense ties have developed into new areas of cooperation such as cyber defense, humanitarian and disaster assistance,
MINDEF said Singapore and US defense agencies interact regularly through military exchanges, training and courses, and defense technology cooperation. The two defense agencies also provide long-term support for each other's strengths in their home countries, he said.
In 2019, the two countries renewed the 1990 Memorandum of Understanding (MOU) Regarding Use of US Facilities in Singapore and signed an MOU on the establishment of the Republic of Singapore Air Force Combat Training Detachment at Andersen Air Force Base, Guam. It was Secretary Austin's first visit to Singapore as US Secretary of Defense, MINDEF said.
In mid-July, US Secretary of State Antony Blinken reaffirmed Washington's position on rejecting China's maritime claims to the South China Sea in an online meeting with foreign ministers of the 10 ASEAN members.
In 2020, Singapore's Prime Minister Lee Hsien Loong said that the US military presence in the South China Sea region "remains vital for the Asia-Pacific region". According to him, China will not be able to take over that role in Southeast Asia even if its military power increases.
In 2016, the United Nations Court of Arbitration deemed China's claims in the South China Sea invalid. However, China remains adamant that it is sovereign over these resource-rich waters.
Since then, President Xi Jinping's administration has continued to build military installations on artificial islands in the South China Sea.