The United States (US) government has offered a reward of up to US$4 million for those who can arrest Al-Qaeda leader Ibrahim Ahmed Mahmoud Al-Qosi. Fia is said to be a senior Al-Qaeda leader who encouraged attacks on the US. 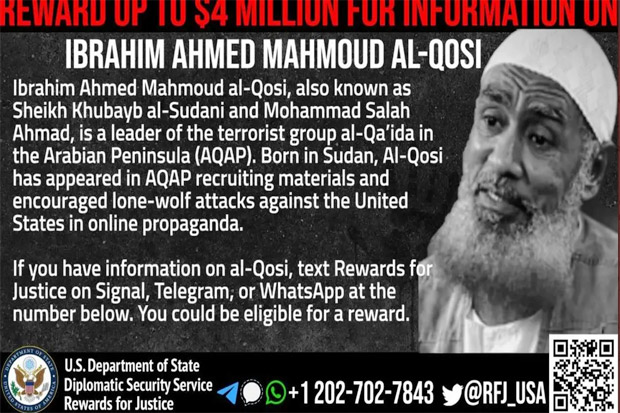 UMMATIMES - The US State Department announced it would provide a reward in exchange for information about the further identification or location of Al-Qosi. It is known, Al-Qosi is part of a leadership team that helps the current "emir" or leaders of Al-Qaeda in the Arabian Peninsula (AQAP).
“Since 2015, he has appeared on AQAP recruitment materials and encouraged single attacks against the United States in online propaganda. He joined AQAP in 2014, but has been active in al-Qaeda for decades and worked directly for Osama bin Laden for many years," the State Department said in a statement.
Al-Qosi was actually arrested in Pakistan in December 2001, before being transferred to Guantanamo Bay. He pleaded guilty in 2010 before a military commission to conspiring with al-Qaeda and providing material support for terrorism. However, he was released and returned to Sudan in 2012 under a pretrial agreement.
The US often offers gifts in exchange for information on the whereabouts of terrorists which can range from US$3 million or to US$10 million.