An online Black Flag campaign has been circulating on Malaysian social media to protest the poor handling of Covid-19 by Prime Minister Muhyiddin Yassin's government. 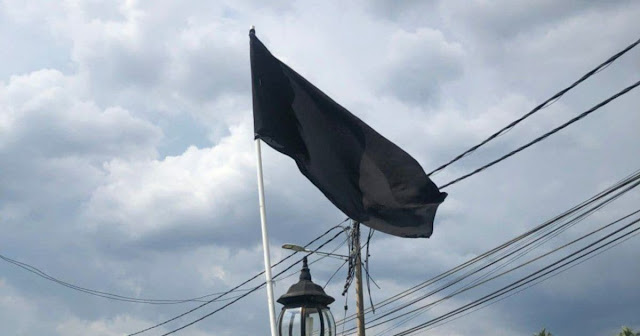 UMMATIMES - The Black Flag Campaign conveys three demands, namely that Prime Minister Muhyiddin Yassin should resign, that parliament reconvene, and that the state of emergency be ended, quoted from Free Malaysia Today, 7 July 2021. The campaign filled Malaysia's Twitter with the hashtag #flagblack.
Malaysian police are investigating the black flag campaign on social media for allegedly containing sedition elements.
The New Straits Times reported that Bukit Aman Criminal Investigation Department Director Datuk Seri Abd Jalil Hassan said the investigation into the campaign was still in its early stages and was updated from time to time.
"This case is being investigated under Article 4 (1) of the Sedition Act 1948, Article 505(c) of the Criminal Code and Article 233 of the Communication and Multimedia Act 1988," he said.
But two Pakatan Harapan MPs have urged the inspector general of police to stop investigations into the #black flag campaign, arguing that there is nothing illegal in the movement.
West Ipoh MP M Kula Segaran said the police should investigate criminal and corruption cases more than campaigns. He said people were just expressing their frustration and unhappiness with Putrajaya (Central Government of Malaysia).
Sungai Buloh MP Sivarasa Rasiah called the investigation "absolute nonsense", urging the IGP (Inspector General of Police) not to allow the police to be used as a political tool.
"There is nothing illegal in calling for the prime minister to resign, for Parliament to convene & the state of emergency ends, and using black flags to express your views," he said on Twitter on Monday, Free Malaysia Today reported.
People's Justice Party vice president Tian Chua has called on the public to raise the black flag against the government and its bad leadership.
According to Tian Chua, black and red were historically the colors of struggle because they represented rebellion against oppression.
"More importantly, he rejects the fatalistic logic that the fall of a tyrannical power will be replaced by another centralized power. His struggle is to reclaim power for the people," he said in a Facebook post.
Tian Chua said he had changed his Facebook profile picture to a black and red logo last month.
He noted that the situation had worsened since then, with people waving white flags in dire need of food and assistance, and contract doctors organizing campaigns to call for amendments to the health ministry's contract system.
The flag has been used as a symbol of frustration among Malaysians during the nationwide lockdown to prevent the country's worst Covid-19 pandemic.
In the past week, a number of Malaysians have raised or put up white flags in front of their homes because they are no longer able to find food amid the lockdown.
The #flagwhite campaign has been gaining momentum on social media in an effort to encourage people to help others in need during Malaysia's lockdown.
The lockdown in Malaysia has lowered demand for labor, with the number of registered jobs falling by 130,000 in just the first quarter of this year, according to government data from Malaysia's Statistics Department, the New York Times reported. Suicide has been on the rise during the first five months of the year, and the health ministry says part of the cause is the pandemic.
Malaysia last week imposed tougher restrictions on movement, businesses and factories in the capital Kuala Lumpur and the state of Selangor until July 16 to combat a spike in Covid-19 infections, Reuters reported.