Want to Beat China's Bullying State on the Birthday of the Communist Party, Xi Jinping G7?

Want to Beat China's Bullying State on the Birthday of the Communist Party, Xi Jinping G7?

Without further ado, Chinese President Xi Jinping opened the 1st Century anniversary of the Chinese Communist Party with threats. He threatened to beat up countries that tried to bully China. However, he did not directly mention which countries he was referring to. 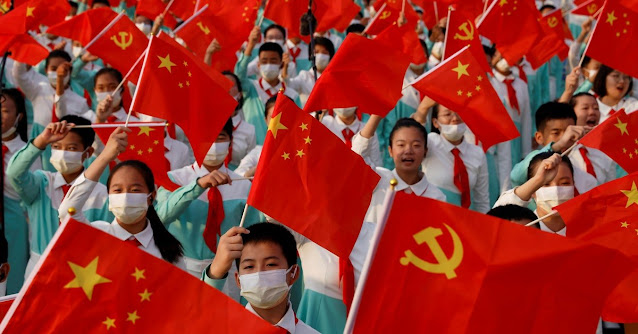 UMMATIMES - "Any country that dares to mess with us will have their heads banged against the iron wall built by the 1.4 billion Chinese people," Xi Jinping said in a speech at Tiananmen Square, Thursday, July 1, 2021.
Xi Jinping's speech was different than usual. So far, Xi Jinping is known to be more calm in spreading threats. Professor of Public Management from Beijing Normal University said Xi Jinping's main goal was not to threaten, but to appear tough in Western countries.
Last month, at the G7 Summit which took place in Cornwall, England, China was one of the main topics of discussion there. The G7 countries consisting of America, Canada, France, Germany, Italy, Japan, and the UK discussed various issues related to China, ranging from human rights issues, COVID-19, economy, to regional security.
Regarding human rights issues, for example, the G7 countries reached a consensus that allegations of genocide and forced labor by China against the Uighur community in Xinjiang should be investigated immediately. Regarding the economy, they agreed to form a new infrastructure initiative called Build Back Better World (B3W) to respond to China's Belt and Road project.
Meanwhile, regarding COVID-19, the G7 countries asked the bamboo curtain country to cooperate in supporting efforts to investigate the two origins of COVID-19. WHO researchers have accused China of complicating efforts to investigate the origins of COVID-19 in Wuhan in January with complicated entry permits and restricted access to raw data. The WHO investigation team went so far as to call their visit to China more like an audit than an investigation.
Shortly after the summit was completed, China said the G7 was carrying out political manipulation to corner and intervene in China's internal affairs. On this matter, China stressed that it would oppose any attempt to intervene. Xi Jinping's speech is believed to be a continuation of that stance.
"Xi Jinping's speech is his attempt to appear tough in front of Western countries. His more assertive response than usual aims to build a spirit of patriotism and nationalism among Chinese citizens," said Tang Renwu, Professor of Public Management at Beijing Normal University.
Kurt Campbell, Director of Indo-Pacific Policy of US President Joe Biden, said China's relationship with the G7 is in a dilemmatic and complex position. While the two camps were at odds on various issues, he said there were also many things where they should work together.
"America has not had this experience before. On the one hand, they must be firm with China on trade, human rights and investment issues. On the other hand, can they cooperate on climate change?" he said, quoted from The Guardian.