Turkish Agriculture and Forestry Minister Bekir Pakdemirli said authorities had tackled 209 forest fires in 47 provinces in the last 10 days until Saturday (7/8) local time. He said, there are still several areas of forest fires that will be extinguished. 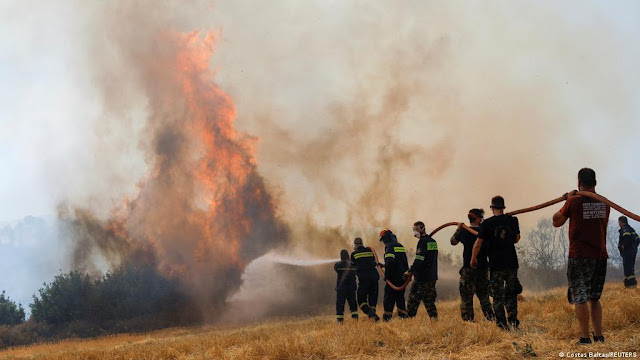 UMMATIMES - The rest of the fires are in Mugla, Aydin, Isparta, Karabuk and Burdur. "The efforts of forest heroes to control 13 forest fires in five provinces continue to be carried out with full dedication," Pakdemirli said as quoted by the Anadolu Agency website, Saturday.
According to official state data, at least eight people have died as a result of the forest fires. The deaths have occurred since the fires started in Turkey's south and southwest on July 28.
A total of 23 aircraft from various countries, including five planes and three helicopters from Russia, three planes and four helicopters from Ukraine, two seaplanes from Spain, one seaplane from Croatia, and one plane and two helicopters from Azerbaijan were also involved in the firefighting efforts. in some areas of Turkey.
The forest fires have affected 3,714 farmers, 397 cattle, 3,961 sheep and goats, 4,856 beehives, 1,353 agricultural structures, 1,137 machines and 2,088 tons of agricultural products at depots in five provinces, 18 districts and 99 villages.
On Thursday, Interior Minister Suleyman Soylu said that a total of 36,365 people from 11,844 households had been evacuated due to the fire in Mugla. So far, 2,975 personnel have participated in the fire fighting efforts. In addition, 110 personnel and 54 vehicles from Azerbaijan have been deployed to Turkey and are on the ground.