Forest fires in Greece are getting bigger

Forest fires in Greece are getting bigger

The area of ​​forest and the number of homes engulfed in flames in wildfires north of Athens and other parts of Greece is growing. More and more people have been forced to flee. 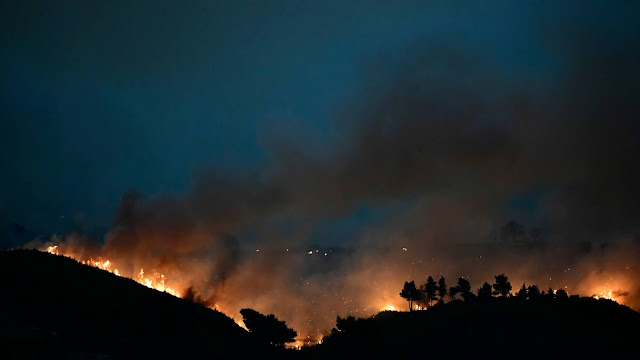 UMMATIMES - Greek authorities have struggled to extinguish 154 wildfires across the country. As of Friday (6/8) the biggest fires were in northern Athan, the island of Evia, and areas in the Peloponnese including Mani, Messinia and Olympia.
"We are facing an even more difficult night, the intensity and spread of the fires is like never before, together with volunteers, all our troops are fighting day and night to save lives," Deputy Minister of Civil Protection Nikos Hardalias said, Saturday (7/8).
The coast guard of Evia Island evacuated 650 people by boat. For four days, the fire burned the forest along the coast. Meanwhile, firefighters have not managed to contain the fire that burns north of Athens.
The fire is difficult to control because of strong winds, so it has the potential to spread to the shores of Lake Marathon and up to Mount Parnitha. Like most other European countries, Greece experiences extreme weather this summer.
The country has been hit by the worst heatwave in 30 years that has sparked wildfires in many areas of the country. The fire that started last Tuesday (3/8) destroyed many houses and killed many animals.
The main highway linking Athens with northern Greece was also burnt down. Hundreds of firefighters tried to extinguish it with water bombs.
One hospital reported that a 38-year-old man was killed by a power pole on the outskirts of Athens.
On Friday, police visited every house in northern Athens asking residents to evacuate immediately. Authorities ordered residents of northern Athens to evacuate immediately as the fire moved closer, burning more and more houses, cars and shops.
"We are seeing a catastrophe of historical magnitude and climate change is the cause, we have to help frontline fighters and those who have lost everything they have achieved in a lifetime in a matter of minutes," said the head of the opposition government, Greek Green Party leader Alexis Tsipras.