Ismail Haniyeh has been elected to a second term as head of Hamas, the Palestinian Islamist group that controls the Gaza Strip, two Palestinian officials told Reuters on Sunday. Haniyeh's term of office will be extended for another 4 years. 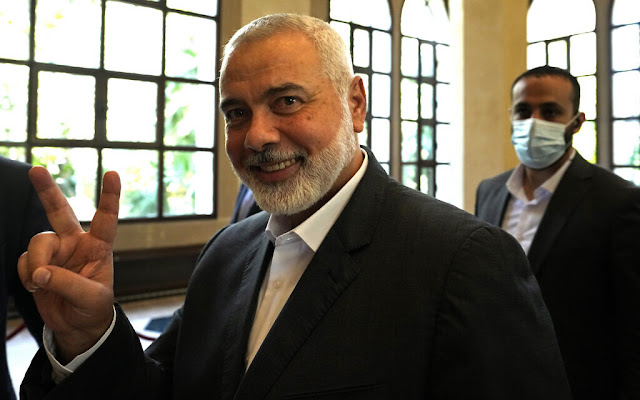 UMMATIMES - "Brother Ismail Haniyeh was re-elected as head of the movement's political office for the second time," an official told Reuters.
Haniyeh, the group's leader since 2017, has controlled his political activities during several armed confrontations with Israel - including an 11-day conflict in May that killed more than 250 people in Gaza and 13 in Israel. He was the right-hand man of Hamas founder Sheikh Ahmed Yassin in Gaza, before the wheelchair-bound cleric was assassinated in 2004.
Haniyeh, 58, led Hamas' entry into politics in 2006, when they were a surprise winner in the Palestinian parliamentary elections, defeating the split Fatah party led by President Mahmoud Abbas. Haniyeh became prime minister shortly after the January 2006 victory, but Hamas - considered a terrorist organization by the United States, Israel and the European Union - is shunned by the international community.
After a brief civil war, Hamas seized Gaza from the Fatah-dominated Palestinian Authority, which has limited self-rule in the Israeli-occupied West Bank, in 2007. Israel has imposed a blockade of Gaza ever since, citing threats from Hamas.