A man was arrested by police late Friday for assaulting passengers on a commuter train in Tokyo, Japan, with a knife. As many as 10 people were injured in the man's attack. 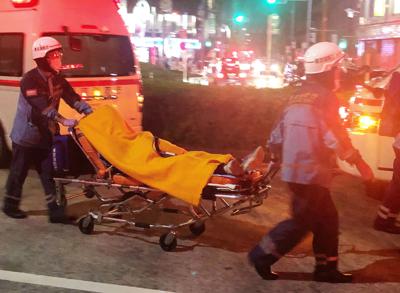 UMMATIMES - As reported by Reuters, the man suddenly became angry when he saw the woman who looked happy. He also wanted to kill them.
Police arrested the 36-year-old man in another part of Tokyo after he slashed and stabbed people in an attack Friday night around 8:40 p.m. The incident occurred on a train on the Odakyu Line in the western part of the city.
One victim was a student who was seriously injured. The rest suffered minor injuries.
The Sankei newspaper reported the suspect's confession to the police. "I started to feel like killing a happy-looking woman about six years ago. Anyone is fine, I just want to kill a lot of people."
By the driver, the train was brought to an emergency stop after a scream was heard from inside the carriage. According to investigators, the suspect jumped onto the tracks and fled.
Train crews guide train passengers along the tracks to the nearest station. A witness, who was on the train, told NHK News that people suddenly started running towards him. They fled from one car to another.
The suspect then walked into a convenience store and informed staff that he was a suspect in the incident broadcast by the news station. He stated that he was tired of running away.
The Tokyo Metropolitan Police confirmed early Saturday that they had arrested a man in his 30s. Nine out of 10 injured were taken to hospital.
Violent crime is rare in Japan. However, there was a spate of knife attacks by the assailants unknown to the victims.
In June 2008, a man in a small truck rammed into a crowd in the Akihabara district of Tokyo. The man then jumped out of the vehicle and began stabbing pedestrians, killing seven people.