At least three police officers and a soldier are seriously injured by the explosion of a bomb after a pro-military demonstration in Meiktila, Myanmar, Monday morning, October 25, 2021.
Ummatimes - Residents of the city in the Mandalay area said security was tight ahead of the demonstration, which reportedly was attended by about 200 people.
An eye witness said that a police vehicle, parked in front of the Meiktila Police Station across from the downtown market, exploded soon after the demonstration ended. 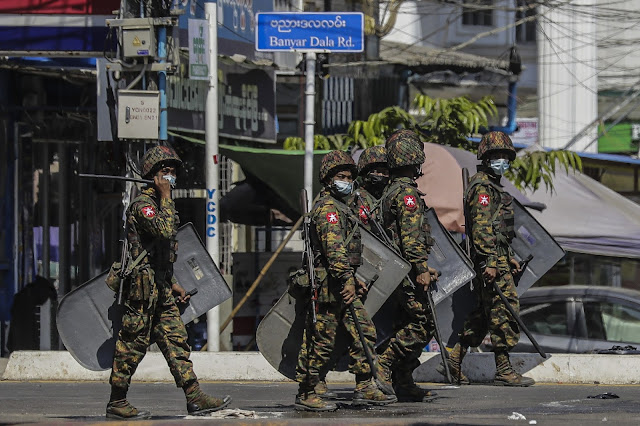 “I saw three police officers and a soldier lying near the car. Their faces hurt. I am not sure if they are alive or dead, but they are not moving," he said, as quoted by Myanmar Now on Tuesday.
“We had to flee in panic, as happened in front of the police station and they just started shooting. The situation is very chaotic," he said.
It was not clear at the time of reporting whether there were civilian deaths or injuries. Calls to police for information about the attack went unanswered.
Another witness who spoke to Myanmar Now said the explosion occurred about half an hour after police who provided security for the demonstration began to regroup at the post, where protesters had gathered hours earlier.
“Security was much tighter this morning. There were so many officers from Battalion 35 Police and so many soldiers as well,” the witness said, adding that the march started at Meiktila Bridge at around 9am and ended about two hours later in the city's Yan Gyi Aung ward.
So far, no one has claimed responsibility for the explosion.
There have been reports that families of military personnel stationed in garrison towns such as Meiktila were ordered to attend rallies in support of the Myanmar Junta regime which seized power in February 2021.