Afghan Refugees in Indonesia Survive Amid the Covid-19 Pandemic

Afghan Refugees in Indonesia Survive Amid the Covid-19 Pandemic

Bismillah Tahirzada's voice from the other end of the phone sounded hoarse as she told the story of the hardships of living as a refugee. Tahirzada started a long journey alone as a refugee from Afghanistan in 2014 or when he was 17 years old. 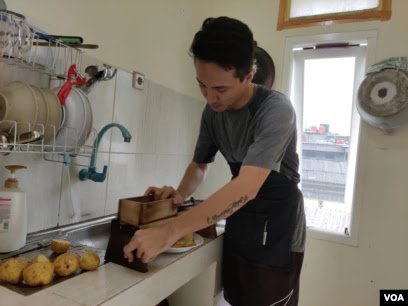 Ummatimes - Armed with USD 9 thousand (Rp 127 million) from savings and a loan from his brother, Tahirzada hopes to arrive in Australia and turn over a new leaf. To get to the Kangaroo Country, he had to pass through Indonesia.
But who would have thought, he was stuck in Indonesia until now (7 years). Tahirzada doesn't even know how long he will be in Indonesia.
"I haven't seen my family for more than 7 years. So far, just the phone. It's too sad and difficult to live as a refugee," said Tahirzada, Monday, October 18, 2021.
Tahirzada said that in Afghanistan the crime rate is high and every time he wants to leave the house, he even likes to think if he can return home safely.
Tahirzada has a refugee card from UNHCR, but this card only allows him to travel within the Greater Jakarta area. Besides, you can't.
As a refugee, Tahirzada lives in a limited circle. Because he doesn't have the right to work legally, can't open a bank account, can't get a driver's license, and can't go out of town.
Life for Tahirzada right now is like going back and forth. He can no longer return to Afghanistan because the country is considered unsafe. On the other hand, he has also not been able to be placed in Australia because the Kangaroo Country has changed the rules regarding accepting refugees and UNHCR has started to slow down the process so that fewer refugees enter Indonesia. As a result, Tahirzada is still stuck in Indonesia.
“I decided to get out of Afghanistan because there was no hope of living there. All my family took refuge in Iran. They can't go to Afghanistan anymore, especially now that it's controlled by the Taliban," said Tahirzada.
Instead of crying over fate, Tahirzada chose to rise. He studied English and learned Indonesian so he started to make many Indonesian friends.
Most importantly, Tahirzada ventured to open a potato chip business to keep her kitchen bubbling. Tahirzada learned to make potato chips, which he named Ashi Mashi, through YouTube and Google. He also took a course on how to build a business, through a training program in collaboration with UNHCR, IOM with UNIKA Atmajaya and Dompet Dhuafa.
At the training ground, Tahirzada promoted his Ashi Mashi potato chips. Those who bought, then gave feedback and the reaction was good. He was also encouraged to continue the potato chip business and did not give up.
Tahirzada explained that the capital for making these potato chips was only Rp. 500 thousand, even then the money was helped by a friend. At the end of 2018, Ashi Mashi potato chips officially launched on the market, which can be purchased through Tokopedia and Shopee.
Unfortunately, the Covid-19 pandemic has made sales of Ashi Mashi potato chips stumbling. In a week, there is at least one order that comes in. This is different from the conditions before the corona virus outbreak, where every day there are always orders coming in.
This is a major blow to Tahirzada because he has not received any assistance from the Indonesian Government and other institutions for a long time. Yet at the same time he had to pay rent and living expenses.
“The decline in buyers is up to 60 percent. But in the last month or so, sales have gone up a bit. Every day there are sales. Before September 2021, at least one order will come in a week," he said.
In 2019 Tahirzada was included in the list of people entitled to receive aid money from UNHCR of Rp. 6 million. Even though he only received this aid money once, Tahirzada still felt quite lucky. This is because Muhammad Saleh, 27 years old, an ethnic Rohingya refugee from Myanmar who took refuge in Medan, admitted that he did not receive this assistance.
Previously, the United Nations in Jakarta in a statement on October 15, 2021 stated that it had disbursed funding of USD 1.7 million (Rp 23 billion) through the UN Multi-Partner Trust Fund / COVID-19 MPTF. This step is the United Nations' inclusive socio-economic response to COVID-19.
Working closely with the Government and partners, the UN wants to ensure that vulnerable groups, including refugees in Indonesia, are not further left behind and marginalized in society and the labor market.
In total there are 1,402 targeted beneficiaries through the Covid-19 MPTF. Of that number, 135 refugees received it.
UNHCR on Thursday, October 21, 2021, explained that the pandemic has brought many challenges not only for some people in Indonesia, but also for many people around the world, including refugees.
Covid-19 has made it difficult for the refugees, after previously finding it difficult to find work due to their status as refugees and language barriers.
UNHCR continues to advocate for refugees to have access to their basic rights, including access to health, education, empowerment, and sources of livelihood.
Not only that, UNHCR has also provided assistance for the rights of refugees to cover the costs of basic needs. However, Julia Zajkowski, UNHCR's Senior Protection Officer admits, that this assistance is clearly not enough. As a result, his party disbursed another aid, this time focusing on the most vulnerable groups.
According to Zajkowski, refugees must have their rights and dignity protected, given business development ideas, for example in the fields of handicrafts, e-commerce and catering business for typical food from their country or e-farming. That way, they can also contribute to the local economy.
Zajkowski assured, his party continues to try to help the refugees. The Indonesian Ministry of Health on September 27, 2021 has opened access to the corona virus vaccine injection for refugees.
Around 30 percent of refugee children have attended public schools. As for access to work legally, Zajkowski admitted that there is no legal framework for refugees in Indonesia on this matter. UNHCR is still working on it even without a legal framework, given the enormous potential.
“There is a lot that refugees can do to contribute to the economy. We are working on this," he concluded.