At the East Asia Summit, Joe Biden Insinuates China About Provocation Against Taiwan

US President Joe Biden told Southeast Asian nations on Wednesday that the United States would support them in defending maritime freedom and democracy and called China's actions against Taiwan a "coercion" and a threat to peace and stability.
Ummatimes - Speaking at a virtual East Asia summit attended by Chinese Premier Li Keqiang, Joe Biden said the US would start talks with partners in the Indo-Pacific about developing a regional economic framework, something critics say lacks a regional strategy.
Southeast Asia has become a strategic battleground between the United States and China, which controls most of the South China Sea, and China has stepped up military and political pressure on deeply democratic Taiwan, an island China considers part of its territory. 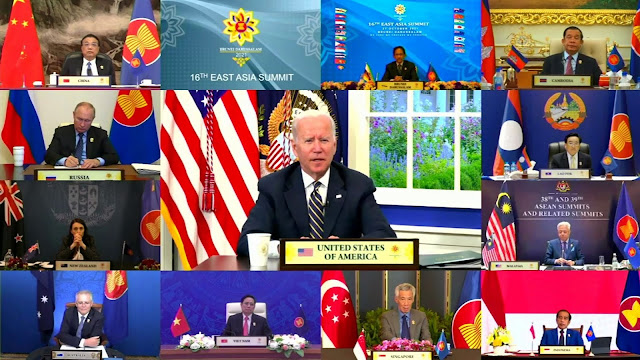 Joe Biden reiterated that the United States has a "steadfast" commitment to Taiwan. "We are deeply concerned by China's coercive actions," Biden said, accusing China of threatening regional peace and stability.
Li Keqiang told the East Asia Summit, which brings together the leaders of the 10-nation Association of Southeast Asian Nations (ASEAN) with regional partners, that upholding peace, stability, freedom of navigation and overflight in the South China Sea is in everyone's interest. "The South China Sea is our common home," he said.
Joe Biden last week said the United States, required by a 1979 law to provide Taiwan with the means to defend itself, would defend Taiwan if attacked by China.
The comments caused a stir because they appeared to deviate from the long-held US policy of "strategic ambiguity" about how Washington would respond to such a scenario.
The White House said Joe Biden did not signal a change in US policy towards Taiwan, and some analysts dismissed his comments as a mere fallacy.
Tensions between Taiwan and China have risen in recent weeks as China has carried out repeated aerial intrusions over the Taiwan Strait, the waterway that separates the island from mainland China.
China expressed displeasure at Biden's comments last week, urging America not to send the wrong signal to Taiwan independence forces, to avoid serious damage to Sino-US relations and peace and stability in the Taiwan Strait.
Joe Biden also said he would speak out for human rights in Xinjiang and Tibet and the rights of the Hong Kong people, with China denying any human rights abuses in the remote regions of Xinjiang and Hong Kong.