The Aqsa Working Group (AWG) plans to hold a Palestinian Solidarity Week on November 22-29. AWG hopes that this activity can be held regularly every year.
Ummatimes - Chairman of the AWG Presidium M Anshorullah revealed that there were several historical events related to the Palestinian issue that occurred in November. On November 2, for example, Palestine commemorates the birth of the Balfour Declaration.
The Balfour Declaration is a public statement signed and published by the British foreign minister James Arthur Balfour on November 2, 1917. In the letter, Balfour stated that the British Government sympathized and viewed positively the Zionist aspirations to establish a homeland for the Jews in Palestine. 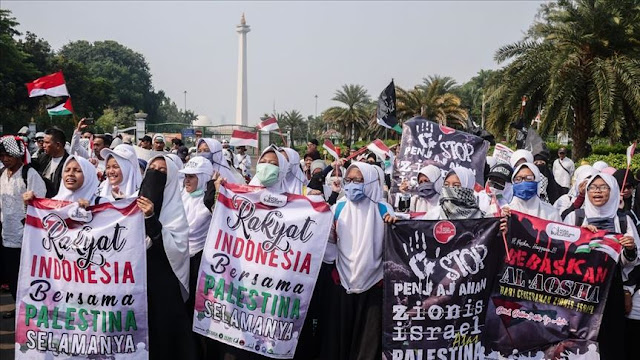 At that time Palestine was the territory of the Ottoman Empire which was in confrontation with Britain and its allies in World War I. The Balfour Declaration encouraged the massive migration of Jews around the world to Palestine.
Anshorullah said, in addition to the Balfour Declaration, on November 11, the Palestinian people also commemorated the death of former Palestinian president Yasser Arafat. A day later, on November 12, Palestine commemorated its independence. Then on November 29 is the United Nations International Day of Palestine Solidarity.
"We want to start, especially in Indonesia, holding Palestine Solidarity Week in November every year," Anshorullah said, Wednesday (27/10).
He explained, for the beginning of this year, the AWG wanted to hold several activities at Palestine Solidarity Week. One of them is holding a workshop by inviting pro-Palestinian figures and interfaith non-governmental organizations. AWG does not limit its activities to Muslims alone. Because the Israeli occupation of Palestine is a form of occupation that must be resisted by all groups.
In addition to the workshop, AWG will also hold a webinar entitled "Indonesia for Palestine". “We also want to hold the raising of the Indonesian and Palestinian flags at the top of the mountain. We will also hold competitions related to Al-Aqsa and Palestine in various areas, from elementary to high school," said Anshorullah.
AWG, which was established in August 2008, has 13 bureaus throughout Indonesia. In each bureau, there is a network of Al-Fattah Islamic Boarding Schools. Those who will be embraced by AWG to carry out competitions related to Palestine at Palestine Solidarity Week in November.