More than two million people have registered as prospective civil servants in China for the 2022 admissions formation. This is the highest record number of civil servant registrations in the country in the past 10 years.
Ummatimes - Registration for the civil servant candidate test closed on Sunday, October 24, 2021, at 18:00 local time and the number of registrants at that time reached more than 2 million people.
This figure is 514,000 more than the number of applicants last year, according to data from Offcn Education and Technology as quoted by China Daily, Tuesday. 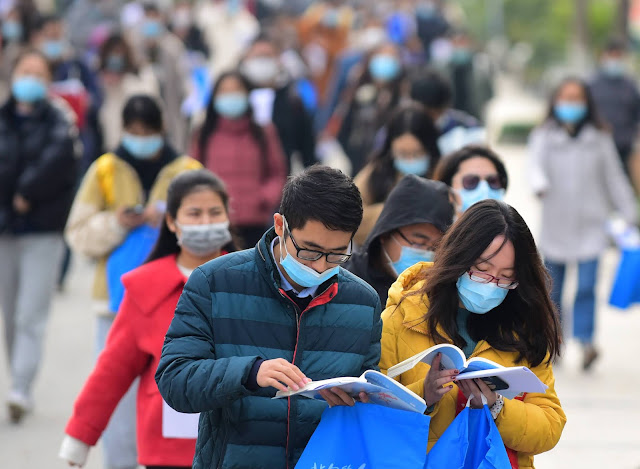 The private educational institution that offers civil servant test training in China said 1.84 million applicants have passed the administrative test so they are eligible to take the next test.
The number of participants who passed the administration was 415,000 more people than last year.
The head of the Offcn tutorial, Wang Jian, expressed the interest of Chinese citizens to register as high civil servants because many college graduates participated.
He even invited several universities in Shanghai and Shaanxi to provide training to students in preparing for the civil service test.
There are two stages of the civil servant test in China which are held every year. The first stage is a written test which will be held on November 28. The second stage is the interview test which will be held next year for those who pass the written test.
After that, 31,242 people will be recruited to occupy positions spread across the vast mainland of China.
This year, 84 percent of vacant positions do not limit work experience for applicants and 67 percent of positions are even reserved for students who have just graduated in 2022.
"In order to get young people to work in places that require certain talents, such as spearheading the lowest levels of government and very complicated work situations, the government offers attractive incentive packages," Wang said.
The most sought after positions are in Ngari Prefecture, Tibet Autonomous Region, with 20,000 applicants.
China once received one million civil servant registrants in 2009 and the number continues to increase. In 2019 there were 1.38 million registrants, in 2020 there were 1.44 million, and in 2021 there were 1.58 million.