Turkish President Tayyip Erdogan canceled the expulsion of 10 Western ambassadors, including the United States, after they declared compliance with the diplomatic convention on non-intervention.
Ummatimes - "Our goal is not to create a crisis, it is to protect the rights, laws, honor and sovereignty of our country," Erdogan said in a televised address after chairing a cabinet meeting.
"With the new statement made by the same embassy today, a step back is taken from this slander against our country and nation. I believe these ambassadors ... will be more careful in their statements regarding Turkey's sovereign rights."
President Erdoan said last weekend that he had ordered 10 ambassadors to be declared "persona non grata" for demanding the release of Osman Kavala, a philanthropist jailed on charges of financing protests and a coup.
Despite his defiant tone, Erdogan's comments on Monday were a real change to cool tensions after the threats he made at the weekend. 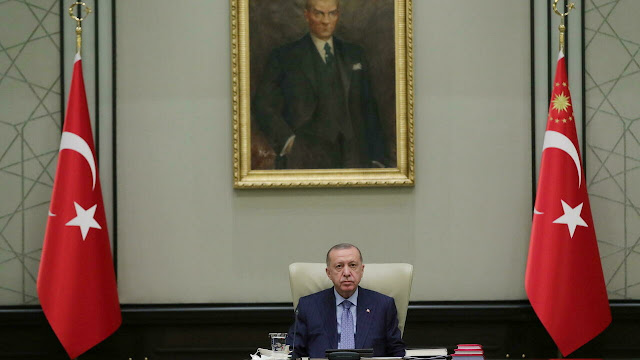 Ambassadors, including from the US, asked authorities last week to release Osman Kavala, a philanthropist who was detained for four years on charges of funding protests and involvement in the coup attempt. He denied the accusations.
The remarks angered Ankara, which said diplomats - also from Germany, France, Canada, the Netherlands, New Zealand, Norway, Sweden, Denmark and Finland - were meddling in Turkey's internal affairs.
When Erdogan convened his ministers Monday afternoon to discuss an expulsion that could spark the deepest rift with the West in his 19 years in power, several embassies issued brief statements.
"The United States notes that it maintains compliance with Article 41 of the Vienna Convention on Diplomatic Relations," the US Embassy said on Twitter. Other embassies published similar messages or retweeted the US message.
The Turkish government's version of the US statement suggests that the embassy is "confirming" compliance with the convention, which some observers say can be read to indicate that the embassy is promising future compliance.
"The strategic ambiguity that allows Erdogan to claim that the West has surrendered, while the English version gives the impression in his home country that the West is standing firm," former opposition lawmaker Aykan Erdemir said on Twitter.
The US State Department later said the statement on Twitter meant "to underscore that the statement we issued on October 18 is consistent with Article 41", and added it would continue dialogue with Turkey.