Erdogan is very firm, Turkey does not need friendship between these 10 countries

Erdogan is very firm, Turkey does not need friendship between these 10 countries

Turkish President Recep Tayyip Erdogan said he had ordered the Foreign Ministry to declare 10 ambassadors from Western countries persona non grata (no longer accepted) because they were pressing for the release of philanthropist Osman Kavala. 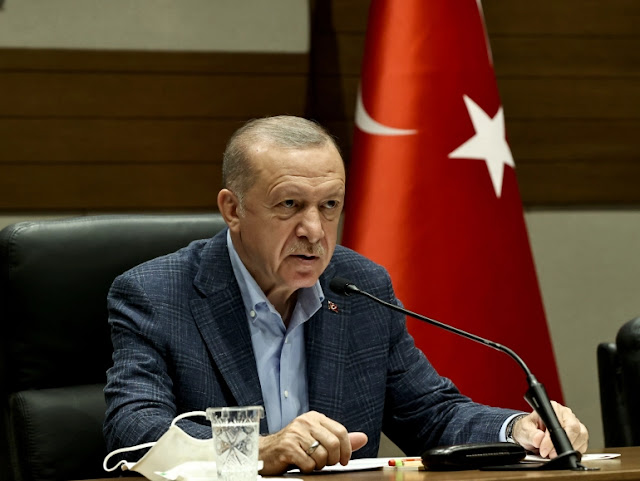 Ummatimes - "I have given the necessary orders to the foreign minister and said what must be done is: These ten ambassadors must all be declared persona non grata. You will finish them soon," Erdogan said during a speech, Saturday (10/23).
The expulsion of the 10 ambassadors, seven of whom represent governments of Turkey's allies in the North Atlantic Treaty Organization (NATO), would be the most severe diplomatic rift with the West in Erdogan's 19 years in power.
Kavala has been in prison for four years. He was charged with funding a series of protests across Turkey in 2013, as well as being involved in an attempted coup in 2016.
Kavala denies the charges and he remains in custody as his trial rolls on.
In a joint statement dated October 18, the ambassadors of Canada, Denmark, France, Germany, the Netherlands, Norway, Sweden, Finland, New Zealand and the United States issued a call for the Kavala case to be resolved fairly and for the philanthropist to be released.
The ambassadors were later summoned by the Turkish Foreign Ministry, which called the joint statement an irresponsible act.
"They will know and understand Turkey. Once they don't know and don't understand Turkey, they have to leave," he told a crowd in the northwestern city of Eskisehir.
His statement was met with cheers from the crowd.
Neither the US, German and French embassies nor the White House and US State Department responded to requests for comment.
Erdogan has previously said he plans to meet US President Joe Biden at the G20 summit in Rome next week.
Norway's foreign ministry, meanwhile, said its embassy in Ankara had not received any notification from Turkish authorities of the expulsion.
"Our ambassador has not done anything that could result in expulsion," the Norwegian Ministry of Foreign Affairs head of communications, Trude Maaseide, told Reuters by email.
Kavala was acquitted last year of being involved in a series of protests in 2014. However, the verdict was overturned this year.
The charges against him were later even added to a case related to an attempted coup.