Goat's Milk Becomes the Foundation of Elephant Calves and Kenyans

Goat's Milk Becomes the Foundation of Elephant Calves and Kenyans

An elephant orphanage in Kenya is testing goat's milk as food for its small herd. This change is a form of nutrition that has the potential to be healthier, cheaper, and supports the sustainability of local residents.
Ummatimes - The Reteti Elephant Sanctuary in the semi-arid scrub region of Samburu, northern Kenya, helps rescue orphaned and abandoned elephant calves. When the elephants are old enough to survive on their own, the sanctuary, established in 2016, releases them back into the wild.
This place has previously used expensive baby powdered milk to feed elephant calves. However, the facility's veterinarian adviser, Steven Chege, said they had started using goat's milk-based formula as a potential substitute especially for elephant calves. 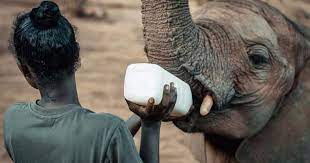 "These are animals that may have recently lost a mother, they have been separated from their families. So, they have received a lot of psychological trauma. It is a big challenge that can endanger their health. Goat milk is very good for the survival and health of the little calves. , said Chege.
In addition, Chege said switching to goat's milk, which is cheaper than infant formula, could cut feeding costs for the sanctuary herd, which fluctuates between 15-30 animals. Although to date they have not conducted a study that takes into account all the associated costs such as cooling.
"Goat's milk is very rich in protein and not just protein, it's a very digestible protein, unlike cow's milk," says Chege, adding that it causes less stomach upset.
You can also see elephant cubs rushing across the dusty enclosure to gulp down milk. They reveal growing fangs as they open their small mouths to pick up a milk bottle.
Local goat farmer, Liwana Lenakukunyia, is one of many farmers selling goat's milk to the sanctuary. He said he was happy to get a new source of income. Many of the farmers who have benefited from this new scheme are women.
"Since we started milking the goats and selling the milk to the sanctuary, at least we have our own money to feed the family," said Lenakukunyia.