The leader of a Haitian gang suspected of kidnapping 17 members of a missionary group from the United States (US) has threatened to kill the hostages if his demands are not met. Wilson Joseph issued an ultimatum in a video posted on social media on Thursday (21/10). 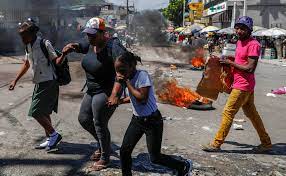 Ummatimes - "I swear if I don't get what I asked for, I will shoot these Americans in the head," the leader of the Mawozo 400 gang said in the video.
Earlier this week, Haitian officials said the gang was demanding a ransom of $1 million per person to free the hostages. Speaking in front of the coffins of gang members who were apparently killed by police, Joseph threatened Haitian Prime Minister Ariel Henry and National Police chief Leon Charles. "You make me cry. I cry water. But I will make you cry blood," said Joseph.
Algeria correspondent Manuel Rapalo said protests in the capital Port-au-Prince against the deteriorating security situation in Haiti continued for a fifth day on Thursday. Haitian workers staged a general strike on October 18 to protest the worsening insecurity and gang violence following the kidnapping of Christian missionaries.
"The concern now, especially after this video has been published, is that tensions will continue to escalate, there is a fear that violence could be spoken in the streets," Rapalo said.