Her whereabouts are kept secret from the public, now Aung San Suu Kyi is talking about her trial

Her whereabouts are kept secret from the public, now Aung San Suu Kyi is talking about her trial

Myanmar's leader Aung San Suu Kyi has denied public sedition charges in her first court testimony. That testimony dates back to the February coup that plunged Myanmar into chaos and ended a decade of democratic reforms, local media reported on Tuesday.
Ummatimes - Citing a team of lawyers, BBC Burma and Myanmar Now reported that Aung San Suu Kyi denied sedition charges in connection with her party issuing a letter in February asking international organizations not to cooperate with the junta.
Reuters could not independently verify the report. Myanmar's state media has not reported developments in Suu Kyi's legal cases and the only source of public information about her trial is her lawyer Khin Maung Zaw, who was ordered by military authorities earlier this October not to speak publicly. 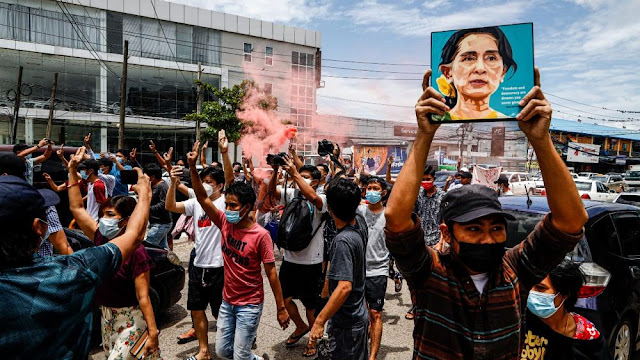 The order came after Khin Maung Zaw earlier this October said Myanmar's ousted President Win Myint testified in court that the military was trying to force him to give up power hours before the February 1 coup.
The military junta also warned him that he could be in danger if he refused orders to remain silent.
The lawyer said Suu Kyi asked him to publish Win Myint's testimony publicly, which was his first story before the coup.
Suu Kyi is being held at an undisclosed location and attended Tuesday's trial at a specially constructed court in the capital Naypyidaw.
The 76-year-old woman was charged with a range of offences, including violation of the COVID-19 health protocol, illegal possession of a two-way radio, receipt of bribes in the form of cash and gold bullion, incitement to public concern and violation of the State Secrets Act.
The team of lawyers denied the allegations, which they said were "absurd".
The Nobel Peace Prize winner led Myanmar's civilian government after his party swept through the 2015 elections, which were held after half a century of military rule ended.