Indian Prime Minister Narendra Modi will attend the UN climate summit or COP26 in Glasgow. The statement was delivered by the Ministry of Environment on Thursday (21/10/2021), as an effort to encourage the reduction of emissions that cause global warming. 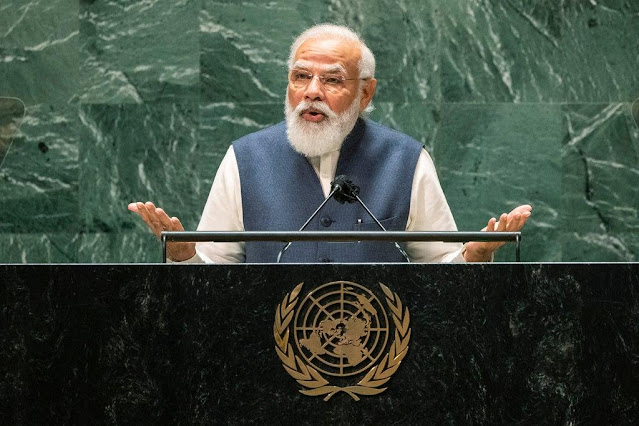 Ummatimes - For information, India is the third largest emitter of greenhouse gases in the world. That's why Modi's presence at COP26 is significant, as Chinese President Xi Jinping will certainly not attend the meeting. China is one of the largest greenhouse gas emitters in the world.
"The prime minister is going to Glasgow," India's environment minister, Bhupender Yadav, told Reuters.

1. India has not committed to zero carbon emissions

On the same occasion, Yadav said that India has done a lot to realize climate change. "India is quite ambitious," he said.
India is on track to increase its green energy capacity to 450 GW by 2030, he said. Currently, India has generated more than 100 GW of renewable energy, which accounts for more than 25 percent of the overall capacity.
India is not known to have committed to achieving net zero carbon emissions by 2050, which is considered a vital goal in limiting global warming to 1.5 degrees Celsius.

Government sources told Reuters that India did not dare to commit to reducing greenhouse gas emissions, as the commitment would affect its national income.
The current economic situation makes India a country that has the opportunity to exceed the economic growth of major countries.
Last month, India's chief economic adviser, K.V. Subramanian, said rich countries need to commit more than 100 billion US dollars to help poor countries in fighting the climate crisis.

3. The UN is worried that COP26 will end in failure

Secretary General of the United Nations (UN), Antonio Guterres, is worried that the climate summit or COP26 which will be held in Glasgow at the end of October will end in failure. Guterres calls the current climate situation a one-way ticket to disaster, meaning things can't be reversed.
"I hope we are still in time to avoid failing in Glasgow, but time is running short, and things are becoming more difficult and that is why I am very, very worried. I am afraid things will go wrong," Guterres said. (22/10/2021).
Guterres highlighted the important role of the G20, one of which is India, as a country that contributes greatly to global warming. They will meet in Rome and discuss how they 'account for' the impact of industrialization.
"They know their economy is responsible for four-fifths of the planet's carbon pollution. If they don't act, we are headed for terrible human suffering."
"Carbon pollution from a handful of countries has brought humanity to its knees (to the climate crisis). Current indications suggest a warming path of at least 2.7 degrees Celsius above pre-industrial levels, and that is clearly a one-way ticket to disaster," he explained.