Iran's newly inaugurated governor was slapped by a man who took to the stage as he gave a speech on Saturday. 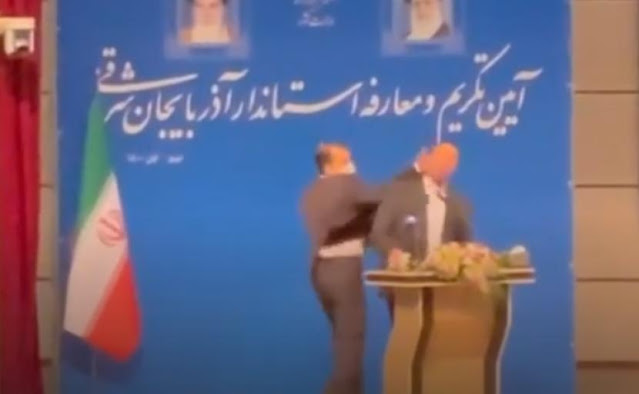 Ummatimes - Zeinolabedin Khorram, the new governor of East Azerbaijan Province, was on stage delivering a speech at the Imam Khomeini Mosque in the northeastern city of Tabriz when the incident occurred.
Quoted from CNN, October 25, 2021, a video uploaded online by Fars news agency shows a man calmly walking up to Khorram, slapping him in the face and then pushing him away. Security guards were then seen running and pulling him off the stage.
The slapping is a rare security breach in Iran, where the event was attended by Iran's Interior Minister, representatives from Ayatollah Khamenei's office and other state officials.
State television broadcast the shocked crowd and the sound system amplified the sound of the slap.
The semi-official Tasnim news agency identified the perpetrator as Ayoub Alizadeh, a member of Iran's armed forces.
According to Sky News, Khorram himself served in Iran's Revolutionary Guard Corps and was reportedly kidnapped by rebel forces in Syria. His last rank was brigadier general.

Today at the introduction ceremony for the new governor of #Iran's East Azerbaijan Province Abedin Khorram, a man went up to the podium and slapped him in the face. pic.twitter.com/vyEFoBy8WA

Other footage shows Khorram telling an unsettled audience.
"Of course I didn't know him, but you should know that, although I don't want to say it, when I was in Syria, I would be flogged by the enemy 10 times a day and would be beaten," he said after the slap.
"More than 10 times, they will put a gun to my head. I consider him equal to those enemies, but forgive him," he continued.
In an interview with state television IRIB, Zeinolabedin Khorram said he did not know the perpetrator personally.
The motive for the attack is unclear. According to Khorram, the perpetrator told police after he was arrested that he slapped him because he was upset that a man had vaccinated his wife at the Covid-19 vaccine clinic, and not a woman, IRIB said in its report.
Other reports said the attack was not politically motivated.
When asked about the incident in parliament on Saturday, Ali Alizadeh, Iran's parliamentary representative from Maragheh, a city in East Azerbaijan Province, said this person's motives were personal and had nothing to do with the appointment of Iran's governor or his speech.