Iran has again allowed Friday prayers after being banned for 20 months due to the Covid-19 pandemic. State television reported Friday prayers at Tehran University, a key gathering place for religious and political events, as authorities warned of a sixth wave of the coronavirus, which has so far claimed 124,928 lives in Iran and infected more than 5.8 million. 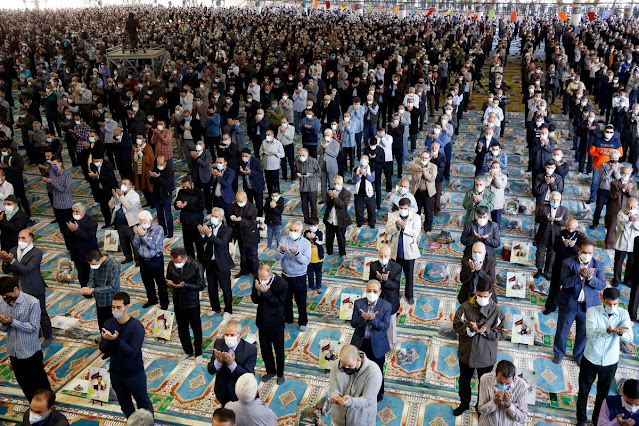 Ummatimes - On Saturday, schools with fewer than 300 students will also reopen, Reuters reported, Oct. 22, 2021.
Starting Saturday, government employees, except those in the armed forces, will be barred from work if they are not vaccinated with at least the first dose, according to a government circular released earlier this week.
The government says more than 28.2 million people have so far received the second dose of the Covid-19 vaccine.
"Today is a very sweet day for us. We thank the Almighty for giving us back Friday prayers after a period of restrictions and shortages," said Mohammad Javad Haj Ali Akbari, Tehran's interim Friday prayer imam who led the sermon.
But worshipers must still observe social distancing and wear face masks during Friday prayers.
Most worshipers brought their own prayer mats and clay stones used for prostration, state television said. Apart from Tehran, Friday prayers are also held in several other Iranian cities.
Meanwhile, schools with more than 300 students will reopen on November 6, Alireza Kamarei, a spokesman for Iran's Ministry of Education, said earlier this week.
Social distancing is still required at least one and a half meters.
But Kamarei said students and teachers were not obligated to vaccinate. He said 85% of the country's teachers and 68% of students have so far been inoculated and classrooms are well ventilated.
Health Minister Bahram Einollah said earlier this week Iran would face a sixth wave next week. The warning comes even as Iran has accelerated vaccination efforts.