Japanese citizens protest against the marriage of Princess Mako of the Empire of Japan with Kei Komuro, her lover who is only a commoner.
Ummatimes - The demonstrators took to the streets in the capital Tokyo, voicing their concern about the future of Japan and the Royal Family. They brought a board with a critique of the marriage.
According to British newspaper Metro, on Tuesday (10/26/2021), more than 100 protesters marched in downtown Tokyo against the wedding.
"More than 100 people lined up today because we want to tell the truth about how troublesome this marriage is, and I don't want the imperial family to get involved in the crime," said Midori Adachi, a 32-year-old part-timer.

Princess Mako married Kei Komuro, her college sweetheart, on Tuesday, and thus lost her royal status. They married in the morning after an official from the Imperial Household Agency (IHA), which runs the family life, submitted documents to the local office to register their marriage. 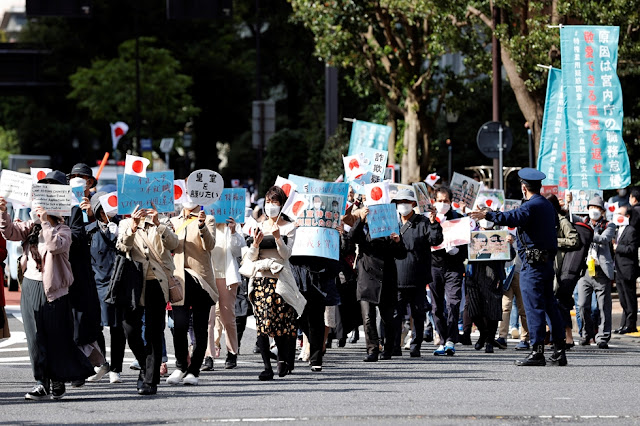 The couple, dubbed 'Japanese Harry and Meghan', have faced intense media scrutiny since becoming lovers at university. Princess Mako was even diagnosed with post-traumatic stress disorder in their relationship.
They had actually announced their engagement in 2017 and Japan initially welcomed the news. However, everything changed when the tabloids reported a money scandal involving Komuro's mother. The press and public mood then turned against Komuro and the wedding was postponed.
Princess Mako then left Japan to study law in New York in 2018 and only returned last month. But after the wedding, Princess Mako will again move to New York with her husband. Mako has applied for the first passport in her life.

After the wedding took place on Tuesday, the 30-year-old couple held their first press conference as husband and wife.
On that occasion Mako said that the 'wrong' news reports about Komuro had caused her great sadness, stress and fear.
“I understand there are various thoughts about my marriage to Kei,” said Mako. "I'm very sorry to the people who had problems (with our marriage)."
Meanwhile Komuro, during a press conference, says he loves Mako and promises to support and protect her.