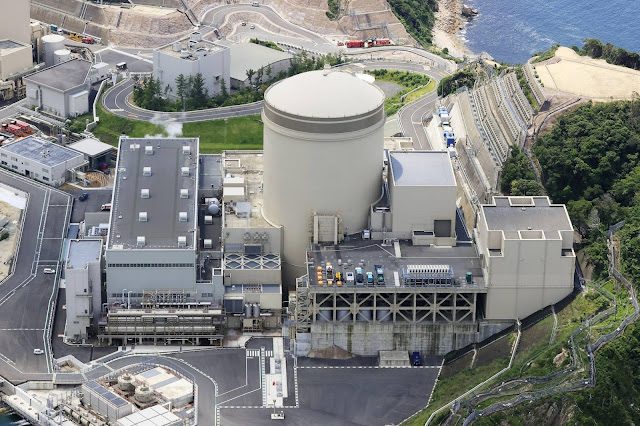 Ummatimes - Kansai Electric Power Co., Inc. shut down Mihama Nuclear Power Plant Unit 3 (Mihama City, Fukui Prefecture, generating 8260,000 km watt) this Saturday (10/23/2021) due to anti-terrorism facilities required by new regulatory standards after the Great East Japan Earthquake was not completed within the deadline which is expected.
Following the earthquake, Mihama Unit 3 restarted in June 2021 for the first time as a nuclear power plant that had been in operation for more than 40 years.
After 4 months running it is now discontinued again.
"We will continue the construction of the anti-terrorism facility, which aims to be operational again in October next year," said a source from Tribunnews.com Saturday (23/10/2021).
On this day, Mihama Unit 3 began work on installing control rods that suppress fission reactions into the reactor from the early hours of the morning.
Power transmission was stopped and reactor operation was also stopped.
As a result, the number of nuclear power plants operating in Japan will only be seven locations.
With the advent of full-scale winter, there are concerns about tight electricity supply and demand.
The cost of alternative thermal power generation is increasing due to soaring prices for liquefied natural gas (LNG) and crude oil.
The government has positioned nuclear power plants as an "important baseload (core) resource" in the basic energy plan decided by the Cabinet on October 22.
It is expected that the ratio of nuclear power generation to total power generation will increase from 6% in the 2019 fiscal year to 20-22% in the 2030 fiscal year.
If a series of blackouts occur due to delays in the installation of counterterrorism facilities, it is feared that the government's goal to reduce greenhouse gases will be disrupted.