Myanmar's Reason for Refusal to Attend the ASEAN Summit

Myanmar's Reason for Refusal to Attend the ASEAN Summit

Myanmar chose not to attend the virtual meeting of the ASEAN Summit on Tuesday (26/10). Myanmar's attitude to skip this annual meeting in protest after Senior General Min Aung Hlaing was not included.
Ummatimes - This year's chairman of ASEAN, Brunei, instead invited Myanmar's high-ranking veteran diplomat, Chan Aye, as a non-political representative. But according to reports by two diplomats, Chan Aye's figure did not attend the meeting.
Min Aung Hlaing's removal is an embarrassment to Myanmar's military and the strongest rebuke by ASEAN since the military ousted civilian leader Aung San Suu Kyi and took over the government on February 1. On that stance, Myanmar's Ministry of Foreign Affairs on Monday (25/10) night pledged to challenge ASEAN's unprecedented move. 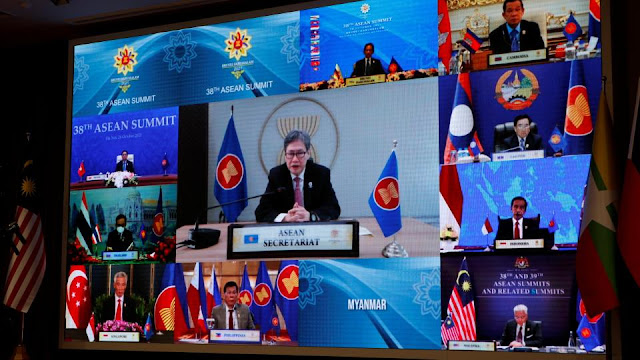 Myanmar has withdrawn from participating in the three-day summit held via video due to coronavirus concerns. They have also informed Brunei that it can only accept participation represented by the top general who now heads the Myanmar government and the ruling military council or ministerial level representatives.
Though the talks will be followed by other world leaders including US President Joe Biden and leaders of China and Russia. The meeting is expected to highlight Myanmar's worsening crisis, the pandemic, as well as security and economic concerns.
ASEAN's sanctions against Myanmar mark a shift away from the bloc's basic principles of not interfering in each other's internal affairs and deciding by consensus. Myanmar cited violations of those principles when it rejected ASEAN's ban on its military leaders from participating in the summit.
Myanmar's absence from the summit follows the impasse over the ASEAN envoy to Myanmar, Brunei's Second Foreign Minister Erywan Yusof. He was denied permission by the military to meet with Suu Kyi and other government leaders detained since the February 1 takeover.
ASEAN leaders agreed on a five-point contingency plan at an emergency meeting in April in Indonesia attended by Min Aung Hlaing. They called for an immediate end to violence in the country and the start of dialogue mediated by ASEAN envoys, who should be allowed to meet all parties. But Myanmar's commitment to the plan is doubtful.
ASEAN is under pressure to help end the crisis in Myanmar. The military tried to quell the opposition, triggering an increasingly violent and unstable resistance.
Nearly 1,200 civilians are estimated to have been killed by security forces. The government says a small number of people have died and security forces have acted to restore order from terrorism and arson.