North Korea on Thursday (21/10) said a recent test-firing of a submarine-launched ballistic missile (SLBM) did not target the United States. Pyongyang added Washington need not worry about the missile test. 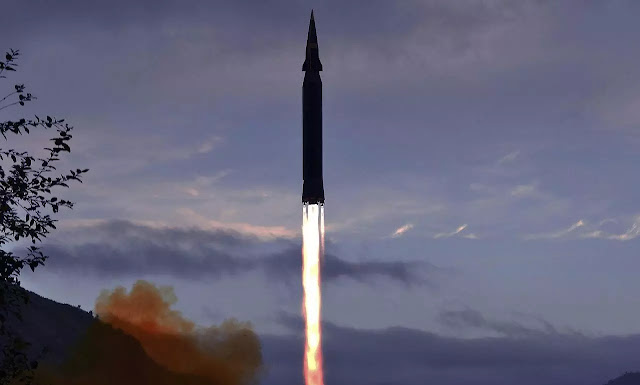 Ummatimes - According to the official Korean Central News Agency (KCNA), a spokesman for North Korea's Foreign Ministry expressed concern at the "abnormal" reaction of the US and the UN Security Council during an emergency meeting on the legitimate exercise of the right to defence. Two days earlier, North Korea fired SLBMs from around the Sinpo area, which is home to a major submarine dock. This marked North Korea's eighth major missile test this year.
"Criticizing the Democratic People's Republic of Korea (DPRK) for developing and testing the same weapons system as the US has or developed is a clear expression of double standards and it only raises our suspicions about the authenticity of the US statement that they are not hostile to the DPRK," the spokesman said. spoke to the North Korean Ministry of Foreign Affairs, who was not named, reported Yonhap.
The spokesman said the emergency meeting of the US and UN Security Council was very provocative. North Korea has warned that if the US does not dispute the exercise of the DPRK's sovereign rights, there will be no tension on the Korean peninsula.
North Korea said if the US and its vassal forces continued to choose the wrong course of action, it could act as a catalyst for more serious consequences. North Korea stressed the US need not worry or trouble itself over the missile test.
"When conducting the recent test, we didn't think about or aim at the US, but it was work that had been planned purely for the defense of the country," the spokesman said.
North Korea expressed its stance on US concerns in the form of a firm reply delivered by a Foreign Ministry spokesman rather than in the usual official statement. Some experts see North Korea's stance as part of an effort to reduce its message to Washington.
"It seems that North Korea is trying to refrain from issuing statements and behavior that could provoke the US, as well as dealing with the movements of the international community," said Yang Moo-jin, a professor at the University of North Korean Studies.
The US has condemned North Korea's missile test. But the United States reiterated it remains committed to engaging in denuclearization talks with Pyongyang.
The US Special Representative for North Korea Policy, Sung Kim, will visit Seoul this weekend for talks with South Korea's Chief Nuclear Negotiator, Noh Kyu-duk. Kim and Noh held a trilateral meeting with their Japanese counterpart, Takehiro Funakoshi, in Washington on Tuesday (19/10).
In this photo taken from North Korea's Central TV Broadcasting Station on October 20, 2021, a new type of submarine-launched ballistic missile (SLBM) is tested from the waters earlier in the day. South Korea's military said North Korea fired an SLBM into the East Sea from waters off Sinpo, a city on the North's east coast.