Hu Shisheng, an expert on Chinese foreign policy in South Asia at the China Institutes of Contemporary International Relations (CICR) think tank, believes China will not be the first country to recognize the Taliban rule in Afghanistan. China will do it with Russia, Pakistan and Iran.
Ummatimes - The Taliban seized power in Afghanistan in August. The Taliban then formed an interim government in September and appointed top Taliban officials as public officials.
To date, no country has officially recognized the Taliban government. This week, however, Chinese Foreign Minister Wang Yi met with Afghanistan's interim government in Doha, Qatar. "Things will be different when the four countries namely China, Pakistan, Russia and Iran reach a consensus on this matter, we will not be the first," Hu said Wednesday (27/10). 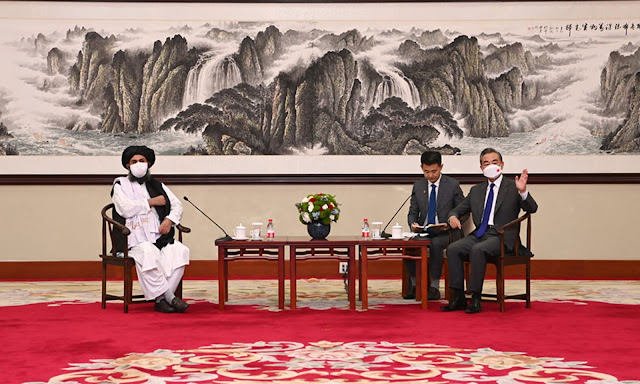 He conveyed this at a security forum held by CICR, namely the Beijing Xiangshan Forum. CICR is a Chinese military think tank that promotes Beijing's security outlook. Hu gave a little calculation of China's policy on Afghanistan.
He predicts that after withdrawing its troops from Afghanistan last September, the United States (US) will want to strengthen military cooperation with India. Thus India can be more 'bold' and pose a threat to China.
Relations between China and India have not been very harmonious in recent decades. Relations were further fractured when their armies clashed in a disputed area on the Himalayan border in June last year and the dispute remains at an impasse. "The new dispute cannot be completely ignored," Hu said.
Hu also said the international community hopes the Taliban will stop their militancy and prevent Afghanistan from going into chaos. This will have an impact on China and its 'Belt and Road' development plans.
He also expressed concern the US could direct resources to create "disruption" for China in areas such as the South China Sea, Taiwan and the Korean Peninsula. "The United States invested $2 trillion in Afghanistan over the past 20 years, even if only $50 billion was diverted, China would feel a lot of pressure," he said.
After withdrawing troops from Afghanistan, the US spoke with countries in the region including India. The US wants to establish a base for counter-terrorism operations. This is also worrying for China.
"The US says these bases are for fighting Afghan terrorists, but they could have other motives related to China and Russia," said Du Nongyi, vice chairman of the board of the China Institute for International Strategic Studies, a research institute for the Chinese Foreign Ministry.
"Central Asia is Russia's backyard. We cannot allow it to become a foothold for the United States," he added.