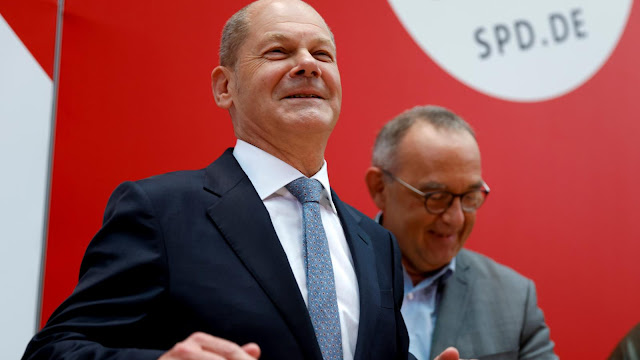 Ummatimes - With this victory, the SPD had the opportunity to nominate a candidate for German Chancellor. Angela Merkel has decided not to run for office after 16 years in power.
The representative of the SPD nominated for the post of Chancellor of Germany is Olaf Scholz. But to achieve this position, the SPD must be able to embrace other parties in parliament, so that they can dominate the vote. The SPD needs a coalition to be able to put Olaf Scholz in place of Angela Merkel.
So who is Olaf Scholz, Angela Merkel's potential replacement?

1. Political activist from a young age

Born on June 14, 1958, Olaf Scholz is a loyal SPD (Social Democratic Party of Germany) activist. He started as a political activist in Jusos, the SPD's working group for young people.
Scholz joined in 1975, when he was 17 years old. He had served as deputy leader of Jusos. Currently, the youth organization belonging to the SPD has as many as 70 thousand members.
Jeremy Cliffe wrote in the New Statesman that Scholz's parents were textile workers. Scholz's youth was spent immersed in left-wing political parties. He was critical of the capitalist system and had an outcry that railed against NATO as "imperialist-aggressive."
The youth 'dissident' belonging to the SPD were still very active and this organization helped set the party machine in Brandenburg and Mecklenburg-Vorpommern. Reported by The Guardian, in the two regions of northeastern Germany that are attached to the capital Berlin, the SPD has decisively 'destroyed' the political machine of the CDU.
The northeastern region, in the 2021 elections, is dominated by red, the typical color of the SPD party, one of the oldest parties in Germany which was formed in 1863 ago.
Until now, Scholz is still loyal to the party and is the preferred figure to replace Angela Merkel's position as Chancellor of Germany.
Scholz was born in the city of Osnabruck, but he grew up in Hamburg. His career began as a lawyer specializing in labor and employment law. After that, he criss-crossed to devote himself as a politician.

As a potential candidate for Chancellor of Germany, Olaf Scholz was once called by local German media like a robot. It happened when he served as Secretary General of the SPD.
'Scholzomat' the nickname given to him, is a combination of two words from the names Scholz and Automat. The reason is that the 63-year-old has a habit of defending labor market reforms in a formula of repeated technocratic speeches, writes Deutsche Welle.
Despite earning the nickname over the years, he defends himself. He said, "I am the seller of the message. I have to show some tenacity."
Personally, Scholz is seen as a politician who has no charisma. He is an introvert, does not like to put himself in the spotlight, and he is a person who seems cold and does not know small things.
Scholz was judged not to know how to express himself or show emotions. Even in times of joy, he kept his face as cold as ever.
Within the SPD party, Olaf Scholz, who has a wife named Britta Ernst, is known as a flexible figure. Even when the SPD became more left-leaning (Marxist), Scholz was able to flexibly position himself.
She is rated as a centrist, similar to Angela Merkel at CDU. Reporting from CNN, his political style is also no different from Merkel. Corinnna Hoerst of the German Marshall Fund of United States (GMF) said "she appeared calm, measured, determined."

3. Fall from national politics and be active in local politics, then return to the top

When the SPD formed a coalition with the CDU in 2007, Olaf Scholz was appointed minister of labour. However, when the coalition broke up in 2009, Scholz was eventually knocked out of the national political arena.
Later, he preferred to return to Hamburg and fight for the post of mayor. He resigned from the Bundestag and fought for the top job in Hamburg.
The local-level SPD party had a bleak image, and was then taken over by Scholz. Jeremy Cliffe explained that various political maneuvers had made the SPD Hamburg win the hearts of the people and he was elected mayor in 2011.
After managing Hamburg, which proved successful in solving problems in the city, in the 2015 election he was re-elected for a second term until 2018.
In 2017, chaos broke out in Hamburg during the G20 summit. Scholz was criticized for belittling the demonstrations which later clashed in which several police officers were injured.
After this position, Olaf Scholz was again trusted in national political positions by serving as German Federal Finance Minister, when the SPD returned to coalition with the CDU.
Sudha David-Wilp from GMF explained that the position of Minister of Finance in the late Angela Merkel era had helped the Chancellor a lot.
"He has been (Merkel's) right-hand man in terms of leading the country for the last four years, he (plays) second fiddle after Merkel, but he has tremendous power within the German government, and also in Europe (where he) represents Germany in Euro policy thing," explained Wilp.

Although currently being mentioned as a potential candidate for Chancellor of Germany, Olaf Scholz is a person who is considered unpopular within his own party. The man, who has spent his life as a member of the SPD, has often fallen, even within the party.
In 2019, he ran for party chairman, but lost to Saskia Esken and Norbert Walter-Borjan. The two men promised to take the SPD further to the left, when Scholz was more famous for being a centrist.
However, during his time as Finance Minister Angela Merkel, according to the BBC, the German public received Olaf Scholz's message in a benevolent financing scheme, for those affected by the corona virus, especially workers and business people.
Germany's resilience in dealing with the pandemic is inseparable from the reliable policy of Olaf Scholz who sits as Minister of Finance.
This achievement turned out to attract constituent votes to support the SPD in the parliamentary elections. SPD's narrow victory over CDU made the party grateful for Olaf Scholz's role.
It is undeniable that the SPD, which has had poor results in a decade, has achieved great results in just a few months of campaigning and the main figure who evoked that electability was Olaf Schoz.
Surprisingly, the leadership of the SPD party chose Olaf Scholz to be nominated as Chancellor of Germany, replacing Angela Merkel.
However, the SPD needs to struggle to embrace the Green party and the FDP to form a coalition to dominate the parliament. The CDU, Germany's currently defeated ruling party, is also seen trying to approach Scholz to build a coalition.

5. Germany's relations with other countries when led by Olaf Scholz

Olaf Scholz could be called a radical from a young age when he joined the Democratic Socialists. However, the journey of his political career, especially when he led Hamburg, became a valuable lesson to be flexible in implementing policies.
In the SPD, he's not that much to the left. It's similar to Angela Merkel. He is not too far right in the conservative CDU party. Merkel's leadership style is even considered to be more socialist-democratic even though she is from a right-wing party.
There are estimates that if Scholz actually becomes Chancellor, then his policies will not be much different from Angela Merkel's.
Reporting from Politico, although Scholz's past was a person who strongly criticized the capitalist system and denounced NATO, it is likely that he will abandon Angela Merkel's version of 'do it yourself'.
Scholz is likely to coordinate first with the European Union (EU), particularly when it comes to the Chinese giant.
Despite his lack of experience in diplomacy with the outside world, Scholz has said he will work for "a strong and sovereign Europe, with one voice." Otherwise, he argued, Germany would lose its role.
Scholz will also see cooperation with the United States and NATO as a fundamental principle, allowing himself not to be as radical as he was when he was younger.