Project Signed, Singapore Will Rely on Clean Energy from Indonesia

Singapore Will Rely on Clean Energy from Indonesia

Three solar power projects were agreed to be developed by a joint venture between Indonesia and Singapore.
Ummatimes - The initial export of clean and renewable energy of 100 MW is targeted to be carried out in 2024, based on a written statement from the Indonesian Embassy in Singapore received in Jakarta, Tuesday.
The signing of the solar power project development cooperation was carried out between PT Trisurya Mitra Bersama and PLN Batam with Sembcorp Industries. The second was carried out by Medco Power Energy with two Singaporean companies Gallant Venture Ltd and PacificLight Energie Pte Ltd. The third was carried out by the Sunseap consortium and the Agung Sedayu Group. 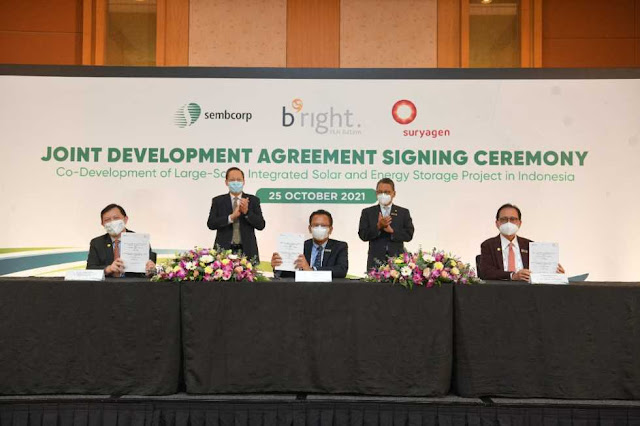 The agreement for the development and purchase of clean energy was carried out in the midst of the Singapore International Energy Week activities which started on Monday (25/10).
Minister of Energy and Mineral Resources Arifin Tasrif and Singapore's Minister of Manpower and Junior Minister of Trade and Industry Tan See Leng witnessed three separate signings between Indonesian and Singaporean companies.
Minister of Energy and Mineral Resources Arifin Tasrif explained, as part of the global commitment to prevent climate change, Indonesia is serious about developing new and renewable energy. Indonesia's potential is very large, starting from solar, wind, water, geothermal, and underwater currents.
"Indonesia will not only be able to meet the needs of clean and renewable energy for domestic purposes, but also for surrounding countries. The initial export of 100 MW from Moon Island is the first milestone for Indonesia to provide clean and renewable energy," said Arifin.
The Minister of Energy and Mineral Resources really hopes that the development of new and renewable energy can help encourage the rise of the domestic industry to produce solar panels. In addition, no less important is the creation of jobs and expertise in the field of new and renewable energy.
When opening the SIEW, Singapore's Minister of Trade and Industry Gan Kim Yong said, Singapore has made plans to become a low-carbon country. For this reason, Singapore will begin to switch from the use of fossil energy to new renewable energy.
One alternative is solar energy and also hydropower. Singapore has started to develop it by utilizing existing resources such as reservoirs and roofs of buildings. However, with a limited amount of land, it is impossible for Singapore to fulfill it from within its own country.
"For this reason, cooperation with neighboring countries and the region is important because Singapore needs electricity supply from low-carbon energy up to 4 GW by 2035. For the first stage we will import electricity from Pulau Bulan, Indonesia, amounting to 100 MW," said the Minister. Gan.
President Director of Medco Energi Internasional, Hilmi Panigoro, explained that the plan to export solar power from Moon Island had started three years ago. Various studies were carried out for a long time and finally got a purchase commitment from the Energy Market Authority to be able to supply the electrical energy needs for Singapore.
"Now our task is to make it happen. There are 1,000 ha of land available so that it can produce 1 GW. However, for the first phase, 100 MW will be exported and we hope it can be realized in 2024," said Hilmi.
President Director of PT Trisurya Mitra Bersama Benjamin Subrata separately explained that his party and Sembcorp not only agreed to build a solar power plant in the Batam area, but also in East Nusa Tenggara.
"For Batam, we plan to start with 350 MW of which 50 MW will be used for Batam and the rest will be exported to Singapore. But we will do a bigger project in Sumba and will develop it on an area of ​​6,000 ha," explained Ben Subrata.