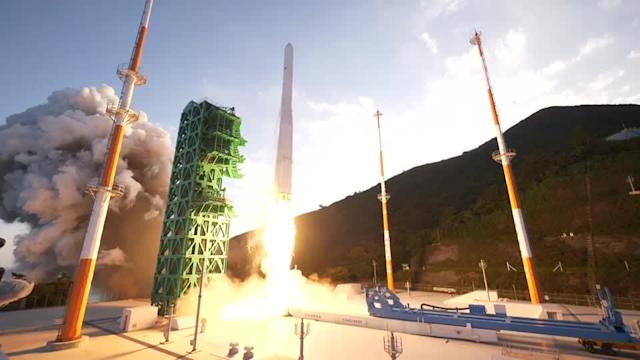 Ummatimes - The Nuri rocket is South Korea's first space vehicle to be fully designed and built in the country of Ginseng, which is supervised by the Korea Aerospace Research Institute (KARI). Nuri in Korean means the world.
During the launch, South Korean President Moon Jae In also watched from the space center.

Through his Twitter account, President Moon claimed to have watched the flight to completion. However, the results have not lived up to expectations because the rocket failed to achieve its goal, which was to fail to place a dummy satellite in orbit.
"But very good as a first shot. It worked," said Moon.
"Sending projectiles up to 700 kilometers into space alone is a great thing, and getting closer to space," he added.
The Nuri development project started 12 years ago. This project will serve as an evaluation material for the second planned launch in May 2022.
The parrot, which cost nearly 2 trillion Korean won (approximately Rp. 23.9 trillion), weighs 200 tons and is 47.2 meters long and is equipped with six liquid-fuel engines.
Quoted from The Korea Herald, Nuri's goal is to place a 1.5-ton mock satellite in orbit.
Previously, South Korea's rocket development program was limited by bilateral missile guidelines from the United States, which were initially enacted in 1979. Then, at a summit in May, South Korea was given full autonomy in its efforts to develop space vehicles.

Previously, South Korea also launched rockets in 2009 and 2010, but ended in failure. Then, in 2013, Seoul successfully launched its first Naro space rocket, although the first stage was built in Russia.
Later, South Korea will improve the performance of its space vehicles. South Korea's projection is to build five Nuri by 2027 and make a moon landing by 2030.
South Korea will launch a lunar orbiter next year, gather technology and experience, and participate in the 'Artemis Program', a manned lunar exploration project promoted by NASA for the first time in 50 years.

3. Arms Race on the Korean Peninsula?

The Nuri launch comes amid tensions with North Korea after the country tested its ballistic and cruise missile capabilities.
Some of Pyongyang's tests violate international sanctions, as the United Nations has banned North Korea from testing ballistic missiles and nuclear weapons. Not only that, North Korea also recently held its own defense exhibition by showcasing its defense equipment, including tanks and missiles.
The Nuri test is seen as part of the country's continuous improvement in weapons development. Because ballistic missiles and space rockets use similar technology.
South Korea recently tested a submarine-launched missile. In what was billed as the biggest defense exhibition ever this week, it was reported that South Korea would launch new fighter jets and weapons such as missiles.
According to Reuters, space launches have long been a sensitive issue on the Korean Peninsula and for South Korea having its own launch vehicle would provide flexibility in determining payload types and launch schedules, as well as benefit South Korean companies.