The police issued a list of the dangers of fraud mainly by telephone which is commonly called Oleole Sagi in Japan.
Ummatimes - A woman yesterday (26/10/2021) cheated 20 million yen in cash handed over to a fraudster who is also a woman.
Some of the dangerous places Oleole sagi we give five kinds of levels. the lowest is Level one and the highest is the most dangerous, lots of fraud Level 5," Wednesday (27/10/2021). 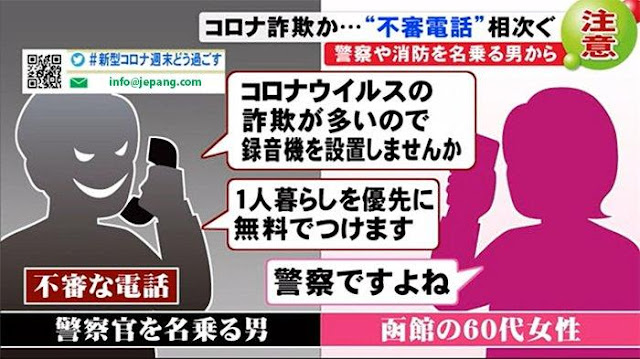 For Level 5 the most scams in Tokyo are the Ikejiri Setagayaku area, and the Akatatsutsumi Setagayaku area with Level 5.
Then Level 4 was given to the Nakazato Kitaku area and the Kamiya Kitaku area.
Following Level 3 fraud which is also widely given to the Minamidaira area of ​​Hino city Tokyo.
A woman who lives alone, gets a call from a man pretending to be a man she knows.
"I lost my bag containing company documents and a bankbook. I had to pay 40 million yen by noon. I wonder if I can do something about it."
The woman victim mentioned the name of the man who called her to test whether she was right or not because she used to communicate with her on the phone every day.
When the woman believes the man's story and then feels worried. Then there was a call from someone claiming to be the “boss” and “the person in charge of the lost goods center.
The woman replied, "I can prepare 20 million yen," and then took the cash out of the bank vault and headed for the road near the park in the Arakawaku area designated as the drop-off point.
The victim handed over 20 million yen in a paper bag to a woman claiming to be the boss.
The woman who felt uncomfortable tried to call her again after the money was handed over.
He only realized he was deceived after the victim called the man who was actually a friend, and stated that he had never called the victim.
The woman who appeared in the park was in her 30s and 40s. He is about 155-160 cm tall, with long black hair and a white mask.
The swindler had put the cash in something like a backpack and left.
The Arakawa police station is pursuing his whereabouts on suspicion of fraud.
Until now, the investigation is still ongoing and the search for the fraudster is still ongoing.