The Strength of the HMAS Canberra Ship, Can Carry 150 Combat Vehicles

The Strength of the HMAS Canberra Ship, Can Carry 150 Combat Vehicles

The aircraft carrier belonging to the Australian Navy, HMAS Canberra, returned to Indonesia on Monday, October 25, 2021. Previously, the ship also visited Jakarta two years ago. The Navy attache at the Australian Embassy, ​​Rod Griffith, said the ship was carrying out the 2021 Indo-Pacific Endeavor (IPE) agenda which focused on humanitarian and disaster management.
Ummatimes - However, the carrier can also be used as a warship and operations control center. She is one of the largest carriers in Kangaroo Country, apart from HMAS Adelaide L01.
"This aircraft carrier can perform force projection for amphibious assault, air support, transport and operations control command center," the statement said on the Royal Australian Navy website and quoted on Tuesday (26/10/2021).
HMAS Canberra is arguably the largest amphibious aircraft carrier in the South Pacific region. This ship has a weight of 27 thousand tons and a length of 230 meters. 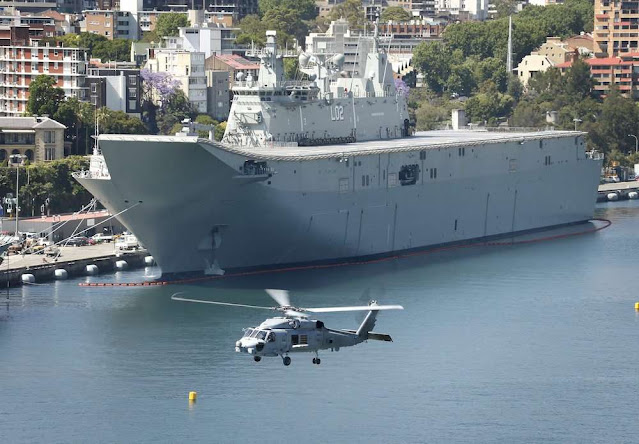 HMAS Canberra is a newly built ship. Citing data from the Australian Navy's official website, the ship was produced in 2009 and just completed 2014. The LHD (Landing Helicopter Dock) design refers to the LHD Juan Carlos warship belonging to the Spanish Navy.
The hull construction was carried out by Navantia from Spain. Meanwhile, the construction of the upper part was carried out by British Engineering Systems Australia in Williamstown, Victoria.
Since the beginning, Kangaroo Country has projected to build two types of ships. First, HMAS Canberra L02 and second, HMAS Adelaide L01. The cost to build HMAS Canberra L02 cost AU$1.5 billion.
However, it is not surprising that with such a high cost, HMAS Canberra has really become a reliable carrier in various operations. It can even accommodate up to 150 combat vehicles and 12 F-35B fighter jets. So, it's no wonder at the end of the HMAS Canberra deck there is a ski jump with a slope of 13 degrees for fighter jet operations if needed.

2. HMAS Canberra can sail more than 45 days at sea

Meanwhile, based on speed, this amphibious carrier can go at a maximum speed of 20 knots. When transporting defense equipment, the maximum speed used is 19 knots.
The HMAS Canberra can also sail for more than 45 days. After that, they had to lean back to refuel. 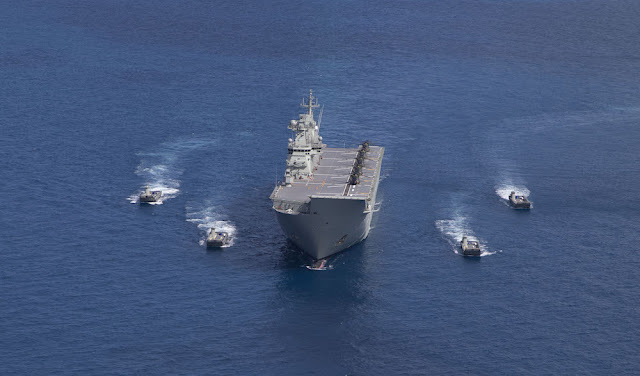 HMAS Canberra is also equipped with enemy self-defense systems such as the Rafael Typhoon long-range weapon system (each located on the side on the flight deck), six 12.7mm caliber machine guns, missiles and torpedoes to distract the enemy.
If there is a greater threat to HMAS Canberra, then the threat will be neutralized by the Royal Australian Air Force (RAAF) either in the form of fighter jets or other escorting military vehicles. Usually the aircraft carrier HMAS Canberra carries 358 personnel. However, when they arrived in Jakarta, they were carrying more than 600 personnel.

3. HMAS Canberra can also function as a hospital ship

During his time in the Southeast Asia region, including Indonesia, HMAS Canberra focused on tasks in the humanitarian field and mobilizing aid to deal with disasters. So, it is not surprising that the ship is also designed to provide medical and humanitarian assistance during emergencies in the region. At HMAS Canberra there is a hospital with a capacity of 40 beds, an operating room, a flight deck that reaches 200 meters, and a storage capacity of up to 7 thousand tons of cargo.
When arriving in Jakarta, the Australian Navy also handed over donations to the families of the crew members of the Nanggala 402 submarine that sank in Bali waters in April 2021.