Do you know who the world's first female president in history was? It is Isabel Perón or Isabel Martínez de Perón, née María Estela Martínez Cartas. Isabel is an Argentine politician who served as president of Argentina from 1974 to 1976. She is the third wife of President Juan Perón and served as vice president (1973–74) in his government.
Ummatimes - Isabel was born into a lower middle class family. She met Juan Perón in 1955 or 1956 and, giving up her career in show business, became Juan's private secretary and married in 1961. Isabel visited Argentina several times in the 1960s and early 70s to support her husband. 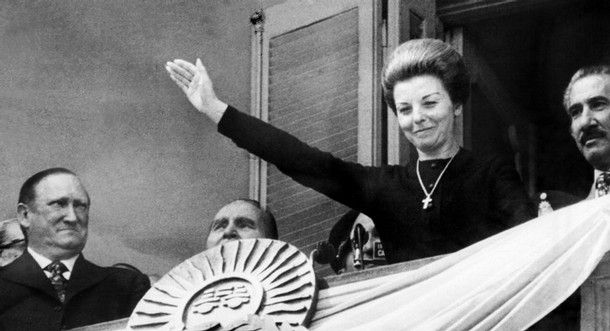 His tenure was marked by political violence and economic instability until he was eventually ousted by the military. Since Carlos Menem's death on February 14, 2021, Perón is the oldest living former president of Argentina.
Achievements Isabel Peron was Argentina's first female president. Even though his presidency has not been very successful, he has paved the way for women to have the opportunity to be more involved with politics, and have less voice.
Scandal When she finally returned to Argentina to run for president in 1973, Isabel was elected her vice president on the advice of her close adviser José López Rega. The couple won the election, and they took office in October 1973. Juan's illness several times elevated Isabel to the position of acting president, and he succeeded Juan when Juan died on July 1, 1974.
Launching from Britannica.com, his regime inherited problems of inflation, labor unrest, and political violence. Isabel tried to solve the problem by appointing new cabinet ministers, printing money to pay off foreign debts, and imposing a state of siege in November 1974 as Argentina was on the verge of anarchy.
The controversy surrounding his social welfare minister, López Rega being forced into exile for corruption and terrorist activities, did not help the situation. Moderate military officers urged him to resign, but he vehemently refused.
The economic and political situation continued to deteriorate, and on March 24, 1976, the world's first female president was arrested by air force officers and held under house arrest for five years. he was convicted of corrupt practices in 1981, but he was released on parole that summer and exiled in Spain. Pardoned in late 1983, he tendered his resignation as head of the Partido Justicialista, the Peronist party, from his home in Madrid in 1985.
In 2007 an Argentine judge issued a warrant for his arrest on charges of allowing the armed forces to commit human rights abuses during his presidency. Isabel Peron, who at that time had obtained Spanish citizenship, was also temporarily arrested.
However, in 2008, Spain's National Court rejected the extradition request against Isabel platform, ruling that the charges did not amount to crimes against humanity and that the statute of limitations had been exceeded.