The United Nations uses dinosaurs as 'witnesses' to the dangers of burning fossil fuels causing climate change. In the video uploaded on social media Wednesday (27/10), dinosaurs attacked the hall of the United Nations General Assembly in New York.
Ummatimes - In the video released ahead of the UN climate change summit, the computer-engineered dinosaur tells diplomats 'extinction is a bad thing'. The dinosaur voice is dubbed by actor Jack Black.
"You're headed for a climate catastrophe, and every year the government spends billions of dollars of public money on fossil fuel subsidies, imagine if we spent hundreds of billions of dollars a year subsidizing giant meteors," said the dinosaur. 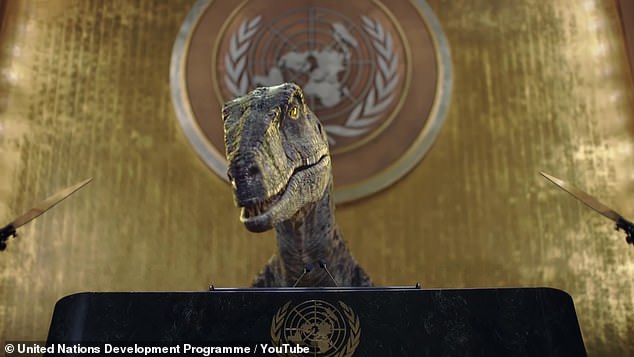 In a report released on the same day, the United Nations said research showed the world was spending four times more on subsidizing fossil fuels than helping poor countries tackle climate change. The United Nations says the money used for subsidies is about $423 billion.
That figure does not include the costs of burning oil, coal and gas which are as harmful as fossil fuel emissions to human health and the environment. UN Secretary General Antonio Guterres has repeatedly called on governments around the world to stop subsidizing fossil fuels.
Something the government was reluctant to do for fear it could trigger an increase in fuel prices which eventually led to riots. The head of the United Nations Development Program, Achim Steiner, realizes that reforming the fossil fuel subsidy system will not be easy and that each country will do it differently.
"But we also know we have to move away from energy sources that contribute to the destruction of our planet, ending financial assistance to them in a fair and equitable manner is a very important element in that transition," he said.