The Japanese government has announced that it will allow foreign businessmen, international students, and interns to enter Japan starting Monday, November 8, 2021.
Ummatimes - As a precaution against the coronavirus, new entries have been suspended since January, but have now been relaxed.
The condition is that the host company or organization administers the vaccination, and if vaccinated, the waiting period at home will be shortened.
To date, cases where there are "special circumstances" such as humanitarian reasons or Japanese spouses have been treated as exceptions, but the scope of relaxation of restrictions has been expanded.
Business people include not only short-term residents of 3 months or less, but also those staying for the medium to long term due to relocation. The condition is that the recipient submits an activity plan.
If not vaccinated, the waiting period at home or hotel is 14 days. Then it becomes 10 days.
If vaccinated, waiting time will be limited to 3 days (for short term visiting business people), and for the next 7 days, only behavioral management such as coronavirus testing before attending dinner or events will take place. 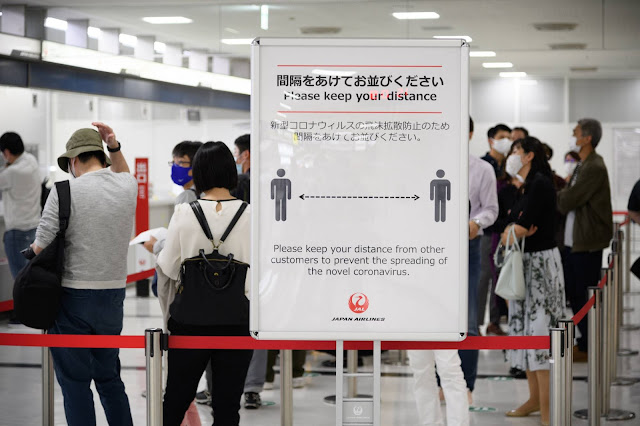 For seven days, the central government will confirm the location via video call once a day, and will not allow travel by train or public bus, making it difficult to know who to contact.
This shortening of the waiting period also applies to Japanese citizens who travel abroad and return to Japan.
However, that does not apply when entering from several countries endemic to mutant strains that have a severe corona impact.
International students and interns are required to wait at home for 14 days after entering Japan. If you have been vaccinated up to two doses, the quarantine period is shortened to 10 days.
Vaccines are for domestically approved products made by Pfizer in the US, Moderna in the US and AstraZeneca in the UK.
The government wants to revitalize the economy by resuming traffic through easing.
According to the Japanese Immigration Bureau, about 370,000 foreigners have not yet come to Japan even though they have received pre-certification of residency status such as study abroad and technical internship training.
Prime Minister Fumio Kishida said "because there is a strong voice (from industry)" about easing immigration for apprentices, Japan's borders have now been opened.
The current number of immigrants is 3,500 per day, but the government is considering expanding this to about 5,000 people per day allowed to enter Japan later this month.
On the other hand, if a new mutant strain spreads, then the recovery will be revisited.
Likewise, if the country concerned (non-Japan) has a high infection rate, it will also be reviewed to enter Japan.