A student opens fire at a high school north of Detroit, Michigan on Tuesday afternoon (11/30). The shooting killed three students and injured six others, including a teacher.
Ummatimes - Oakland County undersheriff Michael McCabe said the suspect was a 15-year-old sophomore in high school. He was detained within five minutes of officers receiving a 911 emergency call. McCabe said officers found the gun of the suspect who surrendered without a fight.
“The suspect fired several shots. There are many victims. It is unfortunate that I must report that we have three deceased victims now, all of whom are believed to be students. Six other people were shot, one of whom was a school teacher," McCabe said. 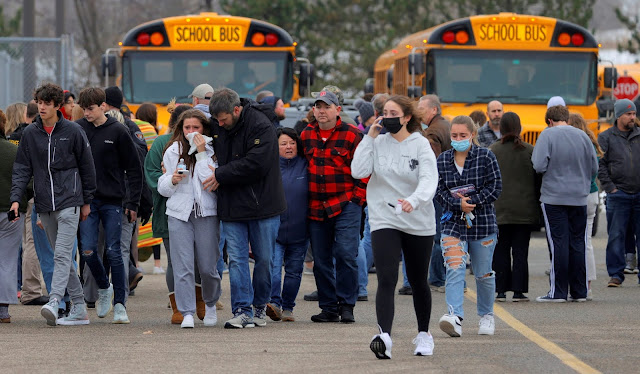 According to a statement from the sheriff's office, law enforcement officers responded to an emergency call at about 12:55 p.m. local time. Officers locked the school in search of suspects and other possible threats. After the area was cleared, the Meijer grocery store across the street was turned into a pick-up area for parents to regroup with their children.
US President Joe Biden spoke about the shooting during a speech in Minnesota on Tuesday night. He conveyed his deep condolences to all the families of the victims.
“My heart goes out to the family during the unimaginable sadness of losing a loved one. The whole community is in a state of shock right now," Biden said.
US Congressman Elissa Slotkin, who represents Oxford, called the shooting "very painful" for Michigan. He offered his deepest condolences to all the families of the victims.
"I extend my deepest condolences to the families of the three students who have lost their lives. We must continue to pray for the injured students and teachers, and for the students who are in shock at this time," Slotkin said.
Michigan Governor Gretchen Whitmer condemned the shooting. He said the crackdown on gun violence was a public health crisis. “As Michiganders, we have a responsibility to do everything we can to protect each other from gun violence. No one should be afraid to go to school, work, a house of worship or even their own home,” said Whitmer.
Lethal gun violence has increased in the US over the past two years. According to the Gun Violence Archive, a research group, in 2020, there were 611 mass shooting incidents in the US.
Earlier this year, President Biden called the mass shooting a national shame. Biden vowed to curb gun violence.