Richard Ratcliffe on Saturday (13/11/2021) ended a hunger strike outside the UK Foreign Office, he is the husband of Nazanin Zaghari-Ratcliffe, a woman with dual British and Iranian citizenship who has been detained in Iran since April 2016.
For 21 days Ratcliffe drank only water in an attempt to urge the UK government to do more to bring his wife home.

Ratcliffe tweeted on Saturday that the hunger strike was ended because he had promised his wife to stop, saying his daughter needed her parents. He thanked all his supporters. After this action ended he went to the hospital to check himself who had stopped eating for 21 days.
According to The Guardian, Ratcliffe was on Friday with his seven-year-old daughter, Gabriella, and his supporters, who gathered to show solidarity. His supporters expressed concern that the stunt could permanently damage his body.
Ratcliffe on Thursday said there was a medical limit to going on a hunger strike and had promised his wife, his family, especially Mother, and to the family doctor, not to do anything too dangerous for him. 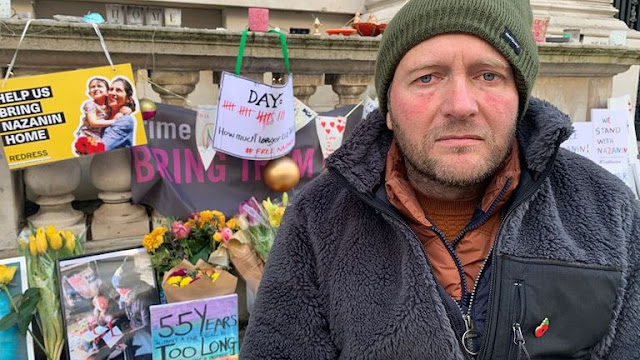 The UK Secretary of State for the Middle East and North Africa, James Cleverly, met with Ratcliffe during the hunger strike protests. After the meeting, Ratcliffe said he felt the government had seen some interest in the case.
This is the second time Ratcliffe's hunger strike, previously carried out two years ago for 15 days in front of the Iranian embassy in London, is thought to have allowed his daughter to return home.

According to the BBC, Amnesty International UK criticized the government, saying Ratcliffe felt the need to use another hunger strike to urge the government to act.
Ratcliffe criticized Prime Minister Boris Johnson for not visiting him during his hunger strike, accusing Boris of not taking his wife's case seriously and of not keeping his word. He urged Johnson not to forget his promise.
Johnson in 2017 while still secretary of state was involved in this case. In November 2017, he had to apologize after he was criticized for suggesting Zaghari-Ratcliffe should be arrested while training journalists, not on a holiday.
Labor MP Tulip Siddiq also criticized Johnson for not taking the time to meet Ratcliffe. Siddiq had visited Ratcliffe during his march and he had secured parliamentary debate for the case to be discussed on November 16. Siddiq said he had been in contact with Zaghari-Ratcliffe, who was concerned about her husband's condition.

3. Detained in Iran accused of trying to overthrow the government

According to the Associated Press, Zaghari-Ratcliffe, who is employed by the Thomson Reuters Foundation, a charity arm of the news agency, was arrested at the airport in Tehran in April 2016, while returning to Britain after visiting family in Iran with his daughter.
He was arrested on charges of plotting to overthrow the Iranian government and sentenced to five years in prison. The allegations he denies, his supporters and rights groups accuse of the detentions as a bargaining chip for money or influence in negotiations with the West, something Tehran denies.
In May, Zaghari-Ratcliffe was sentenced to an additional year in prison on charges of spreading propaganda against the government for taking part in a protest outside the Iranian ambassador's London office in 2009. The verdict was upheld by a court last month, which includes a one-year ban. trip, which means he will only be able to return home in 2023.
According to Ratcliffe, his wife is being used as a political tool in Tehran, especially to pressure the United Kingdom to pay its £400 million debt to Iran.