Air pollution caused the premature death of more than 300,000 Europeans in 2019, according to a European Environment Agency (EEA) estimate published on Monday.
Ummatimes - The European Environment Agency's briefing on the health impacts of air pollution in Europe provides an overview of how three main pollutants: fine particulate matter, nitrogen dioxide, ground-level ozone, affected air health in 2019. The briefing also assesses the potential benefits of improving air quality.
Air pollution is a leading cause of premature death and disease, and the single greatest environmental health risk in Europe. Heart disease and stroke are the most common causes of premature death attributable to air pollution, followed by lung disease and lung cancer, according to the EEA. 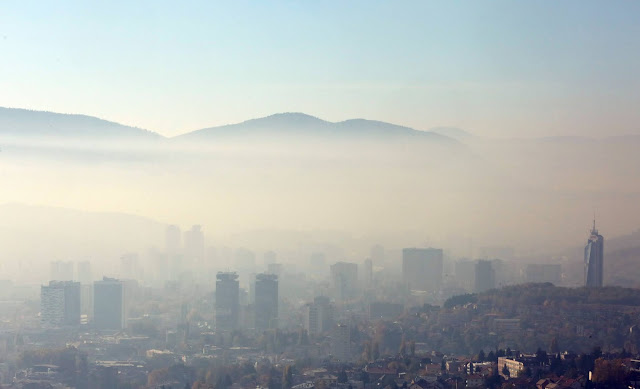 The European Union's Ambient Air Quality Directives set standards for major air pollutants. These values ​​take into account the 2005 WHO guidelines as well as technical and economic feasibility considerations at the time of adoption.
EEA data, published earlier this fall, show that air pollution levels remain above EU legal limits in most European countries.
According to the latest EEA estimates, 307,000 people died prematurely from exposure to fine particulate pollution in the EU in 2019. At least 58%, or 178,000, of these deaths could be avoided if all EU Member States had reached the new WHO air quality guideline level of 5 g/m3.
"Investing in cleaner systems of heating, mobility, agriculture and industry provides better health, productivity and quality of life for all Europeans and especially for those most vulnerable. These investments save lives and also help accelerate progress towards carbon neutrality and strong biodiversity," said Hans Bruyninckx, Executive Director of the EEA.
As part of the European Green Deal, the EU Zero Pollution Action Plan sets a target to reduce the number of premature deaths from exposure to fine particles by more than 55% by 2030, compared to 2005. According to the EEA analysis, the EU is currently on track to achieve target, as this number of deaths has decreased by about a third from 2005 to 2019.
"Breathing clean air should be a fundamental human right. It is a necessary condition for a healthy and productive society. Even with the improvement in air quality over the last few years in our region, we still have a long way to go to reach the level in the Global Air Quality Guidelines. The new WHO," said WHO Regional Director for Europe, Dr Hans Henri P. Kluge.
The EEA briefing was published just ahead of the upcoming EU Clean Air Forum event which will take place on 18 and 19 November 2021. The forum brings together decision makers, stakeholders and experts to reflect on the development and implementation of effective European, national and local air quality projects, and to inform on ongoing revisions to EU regulations, including their closer alignment with WHO air quality guidelines.
Air quality in Europe was better in 2019 than in 2018, which also resulted in fewer negative health impacts. The decline in air pollution in Europe follows a long-term trend, driven by policies to reduce emissions and improve air quality.