Authorities in Delhi on Saturday (11/13/2021) announced plans for a week-long school closure that will start on November 15. This closure was carried out because the results of the assessment showed that the air quality in the Indian capital area was deteriorating, threatening health.

Launching from DW, this decision was taken after many students over the past week missed school even though schools had just reopened, Delhi Chief Minister Arvind Kejriwal said schools were closed to prevent children from breathing polluted air. In addition, the deteriorating air is worrying because there is still a threat from the corona virus.
Ashok Agarwal, national president of the All India Parents Association earlier this week said after COVID-19 pollution has become a major threat to public health, especially for children and the elderly.
The Supreme Court on Saturday had suggested a temporary lockdown as a measure to reduce pollution. 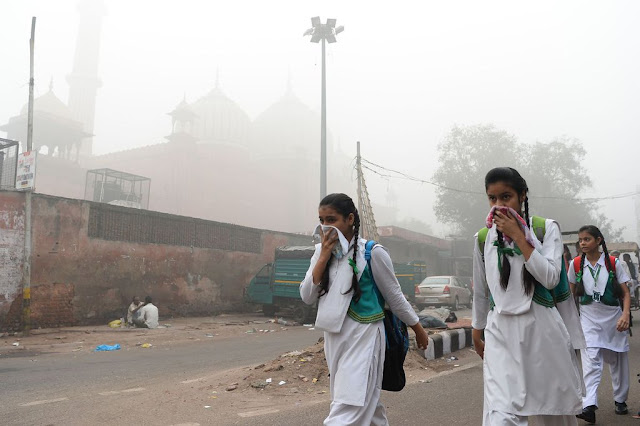 Kejriwal earlier said he would consider the court's suggestion after discussing the possibility with key stakeholders in Delhi. He said such action had never been done and would be an extreme decision.
Kejriwal said construction activities would be temporarily suspended for four days to reduce dust. It also asks workers to work from home if possible.
The council assessing pollution on Friday advised the public to limit outdoor activities in order to minimize breathing polluted air, while also advising government authorities to prepare for implementing measures under the category of emergency.

Launching from The Guardian, on Saturday the level of the smallest and most dangerous 2.5 micrometer particles that can enter the bloodstream has reached 300 on the air quality index, which is 20 times the maximum daily limit recommended by the World Health Organization (WHO). .
Dr Suranjit Chatterjee of Apollo Hospitals said his hospital sees 12 to 14 patients daily in emergencies due to poor air quality, mostly at night, when symptoms cause sleep disturbances and panic.
In a 2020 report the Swiss organization IQAir showed that 22 of the 30 most polluted cities in the world were in India, with Delhi being the city rated as having the worst air pollution. In 2019 there were 1.67 million deaths in India caused by air pollution, including nearly 17,500 in the capital.
Earlier this year, the Delhi government opened an aerial installation that helps halve the amount of harmful particulates in the air, but can only work within a radius of one square kilometer.
In the last few days the river that flows through Delhi, the Yamuna River, has experienced a blockage of white foam which is harmful to health. The Delhi government blames heavy sewage and industrial waste dumped into the river from further upstream for the foaming of the river.

Launching from The Indian Express, air pollution in Delhi is getting worse due to the burning of hay from burning agricultural land and slow wind speeds. According to the quality rating system the contribution of hay burning to the 2.5 micrometer particle level in Delhi was about 31 percent on Saturday.
Usually, farmland fires in India peak in early November and subside before the weather cools down, but this year there has been an increase in farmland fires that have coincided with a drop in temperature, which occurred in a few days from 15 degrees Celsius on November 5 to 11 .1 degrees on November 13.
The smog in Delhi has lasted six days, which is the same as in 2018 and 2020. In 2019, the smog lasted up to eight days. This year the number of agricultural land fires is the highest in the last four years.
Air quality has also deteriorated further due to the celebration of Diwali, which is celebrated with fireworks.