Dozens of ambulance drivers and crew in a Russian city staged a mass strike against the mandate of a coronavirus vaccine. The strike was carried out by 15 workers from the city of Oblucye, 6,000 kilometers east of Moscow.
Ummatimes - As a result of the protests, residents in the town of Oblucye were left without emergency treatment after the workers resigned. "They said they didn't want to get a Covid-19 shot," the chief doctor at the Oblucye ambulance service told news website EAOMedia in the autonomous Jewish republic on Wednesday.
The ambulance workers were then joined by 12 colleagues from the neighboring village of Pashkovo, the Nabat news agency reported on Thursday. 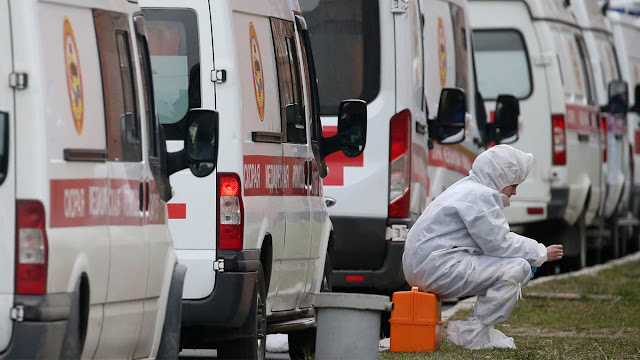 "We are ready to work (but) leave us alone with this vaccine!" said ambulance worker and local Communist Party deputy Ivan Krasnoslobodtsev.
"The vaccine, as far as I know, has not been tested and no one knows how it will affect it in the future," he was quoted as saying.
Research published in the medical journal The Lancet in February showed Russia's Sputnik V vaccine was 91.6 percent effective against the Covid-19 strain. In August, Health Minister Mikhail Murashko said the Sputnik V was 83 percent effective against the Delta variant now hitting Russia. The spread of the Delta variant has made the number of Covid-19 cases in Russia continue to rise in recent months.
Authorities in Russia's 85 regions, including the Jewish autonomous republic where ambulance workers stop, ordered state and service sector workers to get a Covid-19 vaccine. According to Nabat, the 27 anti-vaccine ambulance officers have been questioned by the prosecutor. The prosecutor asked them to fill out a questionnaire about vaccine requirements.
Quoted from the Russian medical bulletin, the federal health watchdog Roszdravnadzor plans to charge medical workers with criminal charges under the 2020 law. Medical workers who refuse the Covid-19 vaccine can be punished for spreading false information about Covid. They face up to 5 years in prison.