Armenia and Azerbaijan Agree to Dialogue to Resolve Tensions

Armenia and Azerbaijan Agree to Dialogue to Resolve Tensions

The European Union (EU) said the leaders of Armenia and Azerbaijan will meet in Brussels in mid-December, Friday (20/11).
Ummatimes - This attempt was made to address tensions that have led to border clashes with some soldiers.
"Leaders have agreed to meet in Brussels to discuss the regional situation and how to resolve tensions for a prosperous and stable South Caucasus, supported by the European Union," said spokesman for the president of the European Council representing EU member states, Charles Michel. The meeting will take place on the sidelines of the EU Eastern Partnership Summit in Brussels on December 15. 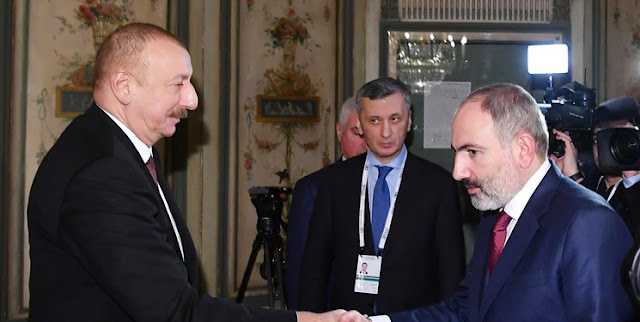 The announcement came after talks between Michel and Azerbaijani President Ilham Aliyev and Armenian Prime Minister Nikol Pashinyan on Friday (19/11) local time.
"During the phone call, the leaders of Armenia and Azerbaijan also agreed to establish a direct line of communication, at the level of each Minister of Defense, to serve as an incident prevention mechanism," the EU said.
The EU has urged both countries to give up their troops and respect the ceasefire agreed earlier in the day. This was prompted after reports that seven Azerbaijani soldiers were killed in border clashes.
On Tuesday this week, Armenia and Azerbaijan agreed to a ceasefire on their border.
Meanwhile, a ceasefire between Armenian and Azerbaijani security forces brokered by Russia was agreed on Wednesday (17/11), just one day after deadly clashes between the two sides.
Clashes between the military forces of the two countries occurred, leaving eight soldiers reported dead on Tuesday (16/11). It is the worst fighting between Armenia and Azerbaijan since last year in the long-disputed Nagorno-Karabakh region.
In the incident in Nagorno-Karabakh, over six weeks, as many as 6,500 people were killed, both from Armenian and Azerbaijani troops. The conflict was ended with a Russian-mediated agreement.
Under the deal, Armenia gave up most of the territory it had controlled for decades. In the latest battle, mediation was brokered by Russian Defense Minister Sergei Shoigu.
The Armenian Ministry of Defense said one Armenian soldier was killed, 13 captured by Azerbaijani troops and 24 soldiers were missing. It stated that the situation in the eastern sector of the border was relatively calm and the ceasefire agreement was being adhered to starting Wednesday (17/11) morning.
Meanwhile, Armenian Prime Minister Nikol Pashinyan accused Azerbaijan of targeting the state, sovereignty and independence of Armenia. He called on Russia's allies for military support under the Collective Security Treaty Organization pact, which obliges Moscow to protect its country in the event of a foreign invasion.
"Given that there has been an attack on the sovereign territory of Armenia, we appeal to the Russian Federation to protect the territorial integrity of Armenia," said Secretary of the Armenian Security Council, Armen Grigoryan.