The swastika on the wall turned into a giant cupcake topped with purple icing and the words "My Hitler" were changed to "My muffins". All done in a day's work for Italian street artists who fight racism by turning evil graffiti into food.
"I protect my city by replacing symbols of hate with good food," said 39-year-old artist Pier Paolo Spinazze.
Ummatimes - On a recent sunny morning, the artist by his professional name, Cibo, is the Italian word for this food and was told by one of his 363,000 Instagram followers that there were swastikas and racial slurs in a small tunnel on the outskirts of Verona. He moved, wearing his trademark straw hat, and stuffed sausage necklace. He took out his spray paint bag and got to work while the car beeped. 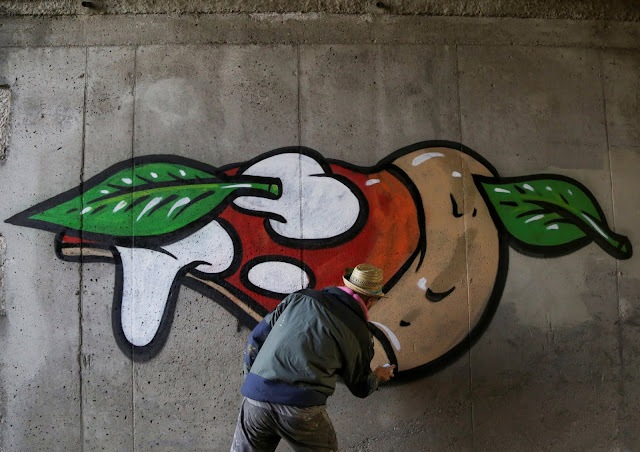 Cibo covered the slur with a slice of bright margherita pizza and a caprese salad made of mozzarella, tomato and basil. A swastika crest is transformed into a large red tomato. As he makes murals in the tunnels, which take about 15 minutes each, people pass by, peeking through windows to stare and wave. An art teacher rolled down his window to praise his work.
In recent years, human rights groups have warned of growing racism in Italy following mass immigration from Africa. The fascist culture and wartime dictator Benito Mussolini still has many admirers.
Cibo has also become a local celebrity in Verona and when he is famous, enemies appear. "Cibo sleeps with the light on!" someone sprayed paint on the wall. He turned threats into ingredients for gnocchi recipes.
"Dealing with extremists is never good because they are violent people. They are used to violence but they are also cowards and very stupid," Cibo said.
"What is important is to rediscover values ​​that we may have forgotten, especially anti-fascism and the struggle against totalitarian regimes that date back to the Second World War. We have to remind ourselves of these values," he explained.